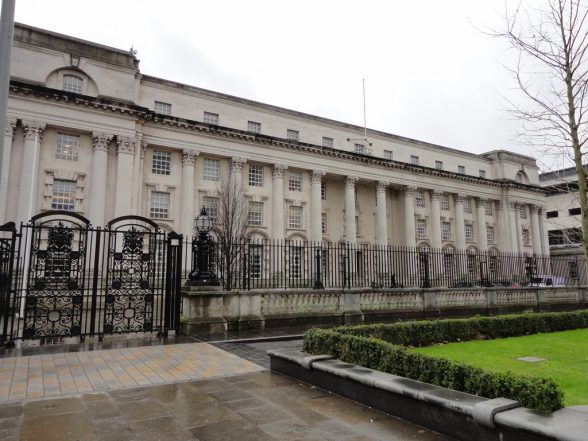 Queen’s student appeal to be he heard in High Court next over claim for damages dismissed last year. New report states PSNI land rover that hit him was travelling at least 15 mph

EXCLUSIVE: AN expert report now states that a PSNI land rover at the centre of a damages claim was speeding at “two-and-a-half times” the speed police officers told a judge it was travelling at when it struck a teen boy.

Belfast Daily revealed in February this year that four constables and a decorated inspector were facing possible arrest by Police Ombudsman NI (PONI) investigators over allegations they gave false evidence under oath during a civil action in October last year.

During the civil hearing at Belfast Recorder’s Court last October, all five officers said they believed the vehicle was only travelling at no more than 6 mph when it struck a teenage boy five years ago.

The case centres on a student who is suing the PSNI for injuries he sustained in 2012 when he claimed he was struck on the leg by an armoured police land rover in the Oldpark district of north Belfast.

The civil case is to be reviewed in the High Court next week when PONI will be asked by a judge to indicate their intentions in the case towards the five TSG officers.

And central to the review hearing is the evidence given under oath by the five police officers about the speed of their land rover at the time of impact on the teenage boy.

The complainant, who is now studying at Queen’s University in Belfast, claimed he was struck by the armoured plated police land rover in September 2012 while walking home with friends.

However, the young boy’s father believes the incident by officers from a specialist Tactical Support Group (TSG) is linked to a 14-year campaign of “intimidation’’ against him.

The former private investigator, who was also involved in close protection duties in the private sector, says he was recently told by a police informant that he had been “marked by rogue officers” whose identities he now knows.

He told Belfast Daily that CCTV footage recovered from a nearby petrol station and which captured the land rover in pursuit of the complainant.

“I have now read the expert’s report. Basically the expert has determined the minimum speed of the land rover was 15 mph.

“But as it cannot be seen past a hedge it is possible the speed was much higher, maybe in excess of 18 mph.

“He most certainly dismisses the police version of the speed at no more than 6 mph.

“So that means the land rover was travelling at two and a half times the speed what these officers stated under sworn oath in court.

“Another camera captured the land rover on the main Crumlin Road before it turned to hit the footpath and that speed is determined to be 29 mph.”

“At around 11 pm I was standing with friends at the bottom of the Oldpark Road, north Belfast on the pavement when I saw a police land rover approach from the Crumlin Road heading country wards.

“At first I froze, then I realised it wasn’t going to stop so I turned around and began to run up the alleyway away from the speeding land rover.

“It continued to run at me and as I entered Shannon Court, which is at the end of the alleyway, I became aware that the vehicle was very close to me.

“As I tried to avoid it I believe either my leg or foot was struck by the land rover causing me to stumble forward.

“I am not sure if I hit my knee on the ground or twisted on impact with the vehicle. It happened so fast but I felt a sharp tearing pain in my knee as I continued to try to avoid being run over.

“I was then brought back to the land rover and questioned about what myself and my friends were doing.  I replied I wasn’t doing anything wrong.

Two senior PONI investigators and its CSI team visited the scene to take pictures and casts of wheel marks at where the teenager said he was struck by the land rover.

He told investigators: “I heard one of the police officers saying to the other: ‘F**k me. You nearly killed him there’.”

“Secondly, CCTV clearly shows the driver of the land rover mounting the footpath without just cause.

“Number 4 TSG based at Castlereagh were involved but a local officer on board, I believe, targeted my son to the land rover crew.

The Police Ombudsman’s office confirmed to Belfast Daily in February this year that they were investigating the perjury allegations.

In a statement, PONI told Belfast Daily at the time:  “We are investigating allegations that a number of police officers lied under oath during a civil court hearing in Belfast last year.”

But as Belfast Daily revealed last week that now, almost EIGHT MONTHS later, and PONI still have not arrested the officers – and it won’t say why.

(1)  Have these officers now been interviewed voluntarily under PACE 10?

(2) If they have refused a PACE 10, why has PONI not arrested them?

A spokesperson for the Police Ombudsman’s office would only say: “Our enquiries are ongoing.”

The father of the student told Belfast Daily: “It is now almost a year since these officers lied under oath in a Belfast courtroom and perjured themselves.

“Yet, the Police Ombudsman’s Office still has not arrested them even though they have the powers to do so as they refused a voluntary PACE 10 interview.

“It just looks like the Police Ombudsman’s Office is dragging heels in the case.’

“We now the opinion of an expert who heavily disputes their version of events. It is time these officers were arrested for perjury and perverting the course of justice,” he added.