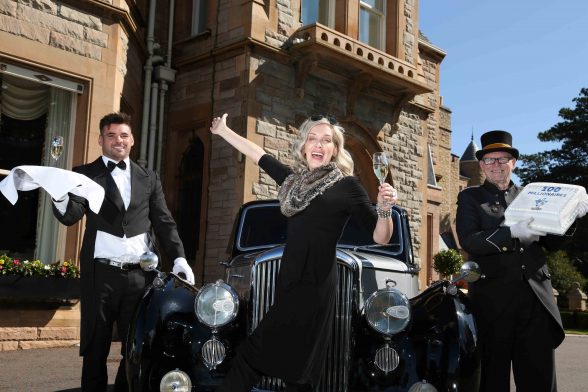 MILLIONAIRE MILESTONE: Celebrating the fact that The National Lottery has now officially created more than 100 millionaires in Northern Ireland are Derry~Londonderry millionaire Anne Canavan, who won £1M on EuroMillions two years ago this month, with butler Paul Pritchard and Jeremy Kevan, concierge at the 5-star Culloden Hotel where many lottery winners have been unveiled.

THE EuroMillions jackpot has reached an estimated £168M in Friday’s draw (6 October).  This is the biggest sum ever offered to UK players and a single winner would be the UK and European record holder.

Top spot on The National Lottery rich list is currently held by Colin and Chris Weir from Largs who won £161M in 2011.

The jackpot is now at its maximum so any money that would have boosted the jackpot, will now be shared among players in the next prize tier with winners.

This means the draw is poised to potentially make lots of multi-millionaires most likely players matching five main numbers and just one Lucky Star.

Giant jackpots like this help raise even more for National Lottery Good Causes. Since EuroMillions started rolling on Tuesday 5 September, it has raised a stunning £55M for projects here in the UK.

Players are urged to get their tickets earlier than normal and avoid any last minute rush, to be in with a chance of winning this colossal jackpot.  Buy online or in retail before 7.30 pm.

Andy Carter, The National Lottery’s Senior Winners’ Adviser, said, “This is one of the biggest draws we’ve ever seen.  Make sure you get your ticket well before the draw closes, either online or at a retailer.

“The extraordinary sum would be life-changing whether won by an individual or syndicate and we have plenty of champagne on ice ready to celebrate.

“It would enable them to transform their life, as well as the lives of their friends and family, and we are poised to support them from the moment they claim.

“This EuroMillions roll series has seen players raise an extraordinary £55M for National Lottery Good Causes in just a month.

“This supports projects big and small across the country, including funding everything from local community projects to the nation’s amazing Olympic and Paralympic athletes.”

The EuroMillions jackpot has now reached its maximum of 190 Million Euros, subject to exchange rates an estimated £168M.

Now it has reached its maximum any money that would have gone into boosting the jackpot, will be shared among players in the next prize tier with winners.

This means the draw is poised to make lots of multi-millionaires probably for players matching five main numbers and just one Lucky Star.

Previously when this happened we have seen up to 14 winners at this tier, the six in the UK each banked £1.9M

Giant jackpots help raise even more for National Lottery Good Causes. Since EuroMillions started rolling on Tuesday 5 September, it has raised a stunning £55M for projects here in the UK.

All National Lottery games raise on average more than £30M each and every week and contributions to the nation since 1994 currently sit at £37 billion.

According to The Sunday Times Rich List 2017, if one winner scooped the entire £168 million jackpot they would be ranked the joint 671strichest person in the UK.

They would be richer than a host of rich and famous stars.

Chef Jamie Oliver has cooked up a mere £150M fortune, multiple F1 world champion Lewis Hamilton only has £131M and Adele has sung her way to £125M.

They would also be richer than a trio of young wizards – the three stars of the Harry Potter films, Daniel Radcliffe (£78M), Emma Watson (£39M) and Rupert Grint (£28M) are worth a combined £145M.

As well as the giant jackpot, EuroMillions makes two guaranteed UK millionaires in each and every draw.  So, regardless of whether the jackpot is won on Friday, players are urged to check their tickets to see if they are one of the two guaranteed big winners.

The National Lottery Rich list in the UK is dominated by EuroMillions jackpot winners.  Colin and Chris Weir from Largs sit top of the pile after winning £161M in 2011.

In all five EuroMillions jackpots of over £100M have been won by UK ticket-holders.

So far this year there have been five UK jackpot winners.  The biggest of 2017 so far was a ticket-holder who banked £87M in June and chose to remain anonymous.

The EuroMillions jackpot has now reached its maximum of 190 Million Euros.  The estimated £168M UK jackpot is based on the current exchange rate.

Once it reaches this level and assuming it isn’t won, it will stay at 190 Million Euros for a further four draws until it has to be won in the fifth draw.

In the past this has created many multi-millionaires.

While the jackpot is at its maximum of 190 Million Euros, players matching five main numbers and one Lucky Star can also expect bigger prizes.

This is because any money that would have gone into boosting the jackpot, will now be shared among players in the next prize tier with winners – most likely players matching five main numbers plus one Lucky Star.