TRAPPED MAN FREED FROM UNDER BUS IN BELFAST CITY CENTRE 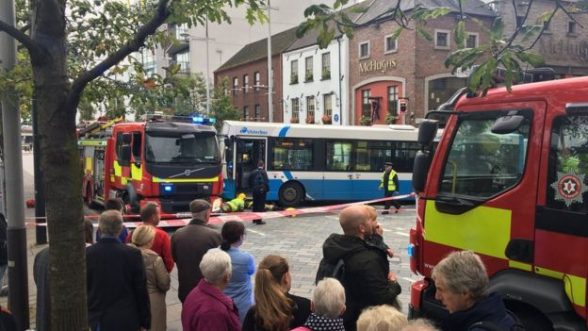 FIREFIGHTERS helped free a man trapped under a bus in Belfast City Centre.

Emergency services used heavy-lifting equipment to rescue the man after the incident at Custom House Square at about 11.30 am.

The man was treated at the scene and was then taken to hospital. He is in a stable condition.

An eyewitness said hat the man appeared to slip and fall under the bus.

“People were screaming to stop the bus driver,” said the eyewitness, who did not wish to be identified.

“It wasn’t anyone’s fault, it was a freak accident.

“It all happened within about 20 seconds.”

A Translink spokesperson said: “We can confirm an incident occurred today at approximately 11.20 am involving an Ulsterbus and a member of the public outside Laganside Buscentre in the Queen’s Quay/Custom House Square area of Belfast City Centre.

“Emergency services were called to the scene and the member of the public was taken to hospital.

“A Translink investigation is under way.”