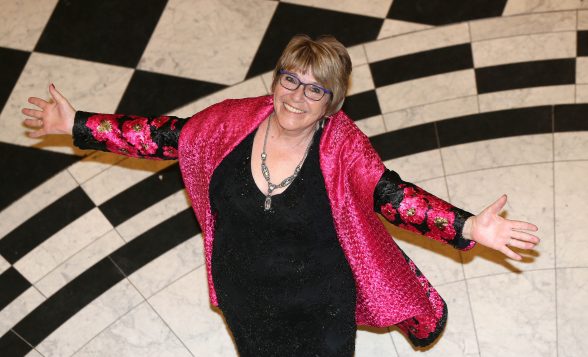 Marie Jones celebrates winning the Lifetime Achievement Award at the Ulster Tatler Awards at Belfast City Hall. The Belfast-born playwright was honoured for her impressive career which is recognised across the world from Ireland to London and New York City
PICTURE BY STEPHEN DAVISON

ONE of Northern Ireland’s most loved playwrights Marie Jones OBE was awarded with the prestigious Lifetime Achievement accolade at this year’s Ulster Tatler Awards in association with Optilase Eye Clinic, which took place last night in Belfast’s iconic City Hall.

After a short spell in acting, Belfast-born Marie became a founder of the Charabanc Theatre Company – an all-women touring group and played a huge role in helping and encouraging the role of women within theatre.

She discovered her love for theatrical writing in the late 1980s and after moving on from the Charabanc Theatre Company, wrote numerous plays throughout the nineties and noughties which became international hits, being performed across the globe from Ireland to New York City.  In 2002 she was awarded an OBE.

Married to Game of Thrones star Ian McElhinney, Marie is best known for her plays Stones in His Pockets, A Night in November and smash hit musical Fly Me To The Moon. Despite finding fame throughout the theatrical world Marie has always remembered her routes, as many of her plays recounted the trials and tribulations of Northern Irish history.

“I have followed Marie Jones’ work for years and not only admire her writing but believe she is a marvellous representative for Northern Ireland and is the epitomy of what the Lifetime Achievement award represents,” said Chris.

Fellow Northern Irish actor and playwright Dan Gordon delivered the citation for the award to a full house of more than 400 guests at Belfast City Hall, reliving the exciting life to date of the inspiring Marie Jones. 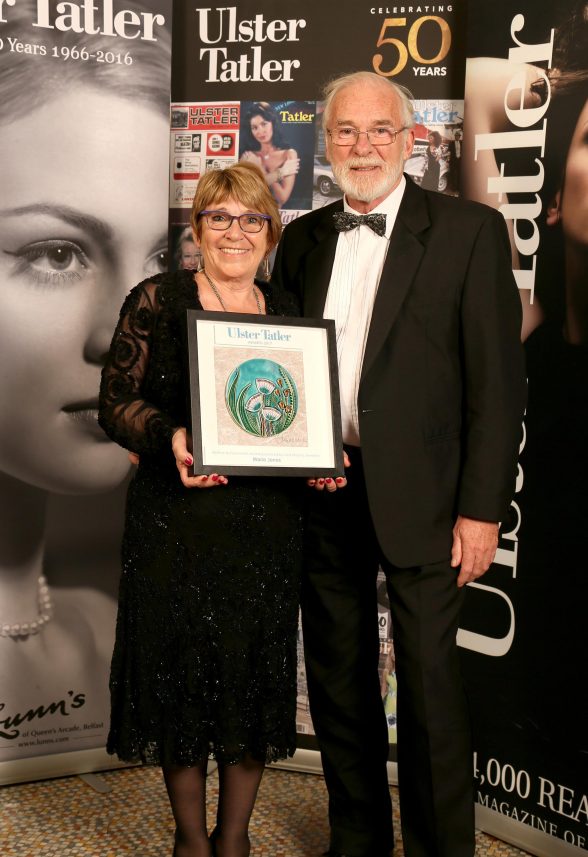 “She is one of the most prolific and successful artists ever to emerge from Northern Ireland,” said Mr Gordon.  “She writes sell-out plays that go to straight to the public’s heart.

“When she was in her early 30s, frustrated by the nature and scarcity of work for women in theatre she and four other actresses founded their own company Charabanc. It was whilst at Charabanc that she first felt the urge to write. She said “As soon as I started to write, I could hear the voices; they were there within me.””

“To this day she continues to produce work that goes to the very heart of what makes our society tick – warts, laughs and all.”

The Celebrity of the Year award was won by Line of Duty star Adrian Dunbar who, earlier in his career, played a lead role in Marie Jones’ production Rock Doves.

The evening, hosted by Pamela Ballantine, wasn’t short of ‘glitz and glam’ as Marie Jones was added to the A-list alongside well known faces Barra Best, Alison  and Darren Clarke, Rebecca McKinney and many others who all stepped out to celebrate at the City Hall venue.

Ulster Tatler editor Chris Sherry said that the event was a huge success.

“This year’s awards were particularly difficult to judge as the standard of local talent in Northern Ireland was so high and every category was jam-packed with worthy nominees,” he said. 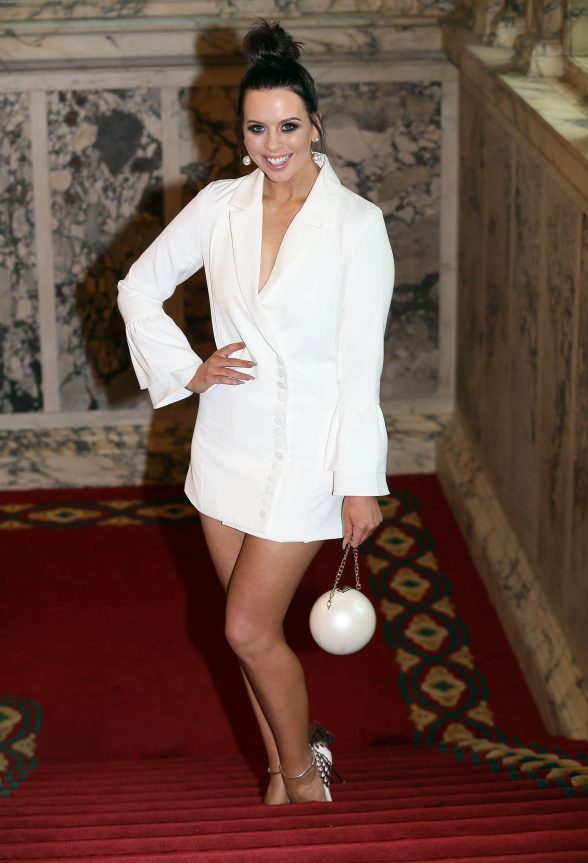 Rebecca McKinney, Cool FM presenter, pictured at last night’s Ulster Tatler Awards in the iconic Belfast City Hall. Northern Ireland’s longest-running glossy magazine, Ulster Tatler, is celebrating over 50 years on the shelves of NI, and its tenth annual awards recognise the people and businesses of Northern Ireland that have lit up its pages since 1966.
PICTURE BY STEPHEN DAVISON

“I also want to personally thank everyone for their support.  This year we are celebrating the tenth year of the Ulster Tatler Awards and the event was a complete sell-out so really we couldn’t have asked for more.  The night was a huge success!” Chris said.

Shortlists in each category were compiled from votes cast by members of the public while dedicated panels of judges had the unenviable task of selecting the winners in the hotly-contested categories.