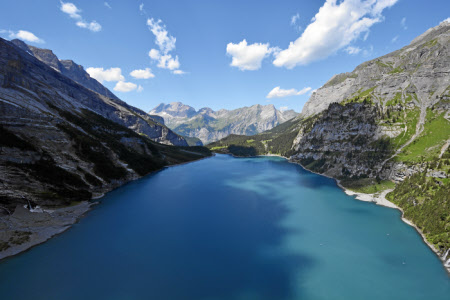 NOT only is it the same sun that shines on the Mediterranean beaches as on the Swiss Alps but, instead of trash, crowds, traffic and hassle, there is the stark contrast of the silence, space and relaxation of Europe’s highest mountains. I soon discovered which of the two holidays I would find the more restorative.

What I liked about Zermatt was its authenticity. It’s still a working community with the men in short woolen trousers and the women in long thick dresses of dark red wool. It’s not solely a tourist resort. There are parades and festivals, singing and yodeling, squeezeboxes and zithers.

These days this German-speaking town has a Portuguese community that’s 3000 strong alongside the original Zermatters (2000) and other foreigners (1000).

At the main church there’s mass at 10 for the Germans, at 4 for the Italians and at 5 for the Portuguese.
This progressive harmony is similarly evident in the lack of rubbish and graffiti. There are no cars, only electric taxis and the electricity is all powered by local water.

The summer season, from mid-June to the end of September, is a third less busy than its December to April winter counterpart.

It took me a bit of time to adapt to the altitude but twenty yawns later and I was ready to explore. It’s all about early rising. And for the goats too who come directly through the village at 9am.

I took myself off on a hike up the mountains, along the supposed ‘granny trail’ that turned out to be a little steeper and more arduous than I had bargained for. I was told, “It’s not the mountain we have to conquer, but ourselves”. I got the just deserts of a lunch at the perfect food stop Chez Vrony (www.chezvrony.ch), a family-run restaurant on the Sunnegga side close by a charming 18th century chapel. And I was able to put my feet up literally on a lounger wrapped in wool as I took in the views and a local beer.

I was to stay at Chalet Les Anges, courtesy of Sylvia Delvaille Jones of Villas and Apartments Abroad (www.vaanyc.com). It’s open plan and spacious with a grand piano in the corner and it has an indoor-outdoor feel. I pulled back the curtains to see the Matterhorn towering over the town and below in the valley all the clustered charm of the Alpine chalets.

Before leaving I witnessed runners from all over the world competing in a marathon pacing themselves as they ran steeply uphill. From one ‘peak bashing’ competition to the next as Nendaz, my next destination, was similarly having a summer contest that was equally bracing and demanding. No granny trails for them.

At Nendaz I stayed at the Chalet Etoile. It’s part of the Hideaways Club (www.thehideawaysclub.com), membership to which allows access to a portfolio of properties all over the world. And it’s great for kids. Many say how much their children preferred the many activities on offer to a beach holiday.

ed for its historic bisses, small irrigation canals which are still such a vital water source that it all reminded me vividly of the Jean de Florette film. The years that must have gone into their construction. They also offered a refreshing dip for Kelsie a lovely huge fluffy St. Bernard who escorted me half the length of my bisse walk from the tourist office to Planchouet. Much more a ‘granny trail‘ I thought, being an hour and a bit along level paths. For those with families, I suggest the engaging qualities of trails and treasure hunts devised by the local tourist board.

For a true dining out treat I highly recommend the passionate creations of chef Loris Lathion and sommelier Romain Arnaud at Le Mont-Rouge (https://mont-rouge.ch/fr). Loris is known also for his variety. ‘If I have to do the same thing for too long, I go crazy” he says. “That is why I change my menu at least six times a year”. Passionate indeed.

I watched other enthusiasts and found the mountain dwellers very infectious. They are unbelievably fit and healthy. I met two people who as a matter of course would be awake at 5am to climb 2000 feet to the top of a peak before roller skiing back down for a day’s work.

I took the romantic walk from my chalet down the piste (before a challenging walk back up) to Restaurant Les Etagnes (www.lesetagnes.com/en). It’s well-positioned at the bottom of the slopes for all the après-ski crowd and it’s where I had a wonderfully healthy and hearty dinner courtesy of the manager Onno, one of the impressive dawn raiders.

On next to Interlaken. It’s easy to see why this tourist resort is so popular. It is uniquely set between two of the great mountains, the Eiger and the Jungfrau, and two of the larger Swiss lakes, the Brienzersee and Thunersee.

But the real delight of Interlaken is its ‘glacier milk’. This beautiful aquamarine channel of water unites the two lakes and is so stunning it deserves the following explanation. When temperatures warm up during the summer the snow on the Alps begins to melt and cascade to meet tiny particles of rock. It results in a green, cloudy appearance by the time it enters the rivers and streams and hence the name ‘glacier milk’, a type of blue that I had only ever witnessed in the seas of the South Pacific.

My final resting spot was at Interlaken’s foremost hotel the Victoria Jungfrau Grand Hotel and Spa (www.victoria-jungfrau.ch/en). Which has a state-of-the-art Nescens Spa and is the perfect way to finish a day up the mountains.

I got to appreciate how the Alps form the backbone of Europe and to see the fairytale charm of the farm buildings amongst the patchwork of pasture and tilled land. It’s all green and abundant. The Swiss literally carve out their existence from the Alps. They also have developed robust, healthy, grounded, non-showy, undramatic characteristics. All formed, I felt, by the environment.

It seems so odd that people are prepared to arrive in hordes to the Mediterranean to search for their overcrowded beach holiday when for children as well as adults there is so much more variety and opportunities to relax in the sun, take in the fresh air and come back fully restored from a summer holiday in the Swiss Alps. Even for laggards like me!

3 nights at Victoria-Jungfrau Grand Hotel & Spa from £1049 per person. Prices based on 2 adults sharing a superior double room on a bed & breakfast basis and includes return flights from London Gatwick to Zurich and first class rail transfers.

7 nights at Victoria-Jungfrau Grand Hotel & Spa from £2416 per person. Prices based on 2 adults sharing a superior double room on a bed & breakfast basis and includes return flights from London Gatwick to Zurich and first class rail transfers

Adam Jacot de Boinod worked on the first series of the BBC panel game QI for Stephen Fry.
He is a British author having written three books about unusual words with Penguin Press.