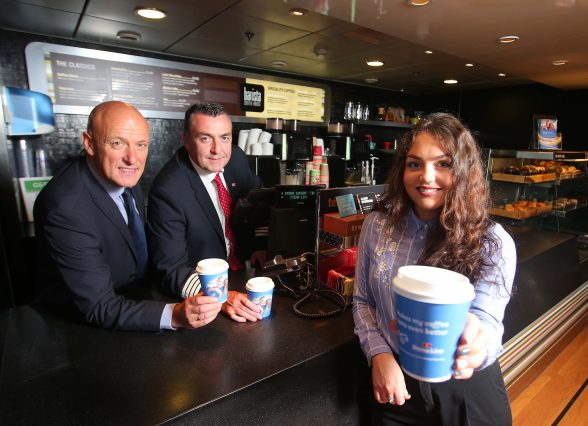 STENA Line has launched a Group-wide Coffee Campaign to support the Mercy Ships charity in their efforts to deliver free, world-class health care to people in need in the developing world.

A key part of the campaign will see Stena Line customers being given the opportunity to choose to buy coffee or tea in a special Mercy Ships mug where 20p will be donated directly to Mercy Ships.

“Every year we sell over 1 million cups of coffee or tea onboard our ships and we believe that buying their hot drink in a Mercy Ship mug is a simple and effective way for our customers to help make a contribution to the inspiring work of the Mercy Ships charity,” says Niclas Mårtensson, CEO of Stena Line.

The humanitarian NGO Mercy Ships organisation and Stena Line went into partnership formally in February of this year with the aim to raise general awareness about the charity, promote volunteering and charitable giving both within Stena Line itself as well as amongst its customers and partners.

“Care is part of Stena Line’s soul which means that our sustainability work also includes more than just environmental initiatives.

“Our partnership with Mercy Ships now becomes an important part of that work and it gives us an exciting opportunity to involve our staff, customers and partners in helping to make a difference,” says Niclas Mårtensson.

As a part of the partnership Niclas Mårtensson made a visit to Mercy Ships hospital ship Africa Mercy in Benin earlier this year, and was hugely impressed by their work.

“Mercy Ships is doing life-changing work. In Benin’s capital Cotonou, where we made a visit earlier this year there was an acute shortage of healthcare with just one doctor for every 17,000 inhabitants.

“Since the middle of August, their vessel Africa Mercy has been in Cameroon and it’s hard to imagine the scale of the challenges they face if you haven’t seen it with your own eyes or if you are lucky to have been born in a country where medical care can be taken for granted,” says Niclas Mårtensson.

“We are very happy with our Stena Line partnership and the Coffee Campaign is yet another great creative idea they have offered to help drive interest and awareness in Mercy Ships as well raise funds for our great cause,” said Pascal Andréasson, Head of Marketing Mercy Ships Sweden.

The campaign will run for two months until 31st of October.