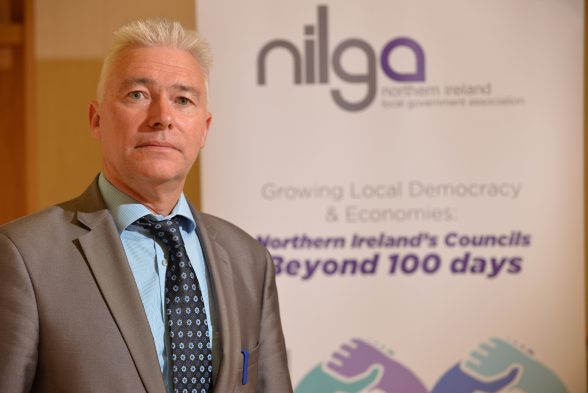 THE chief executive of the Northern Ireland Local Government Association (NILGA) has welcomed the publication of the government’s  ‘Northern Ireland and Ireland position paper post Brexit.

But Derek McCallan said it lacked specifics and called for more powers and resources for councils as a result of the political impasse at Stormont.

In a statement, Mr McCallan said: “We welcome the fact that there have been some views outlined in a number of position papers on the Brexit hot topics in the last few days.

“However, we are still miles from specifics. We need stronger assurances from government about what this is all leading to – clear options for key partner bodies in manufacturing, farming, local government, construction, and so on, to comment upon – what reality will look like for local people and businesses.

“Without an Assembly we’re in a vulnerable position.

“The increasing disconnect between what is going on in London and the delivery of services on the ground here must be halted and we cannot have a shift back to centralist policies and decision making. Councils can be the antidote to this.”

“We are calling for councils to be given real powers and real resources as part of solving this widening democratic deficit – before we are literally disempowered and made uncompetitive as an economic region.

“NILGA has asserted for some time that you can’t run an economy in a political bubble.

“There is a backlog of important policies and legislation materially affecting how councils and others provide the public with services.

“Surely it would be a mature and rational thing to sit down with local councils and push through whatever legislation or policy is needed to move ahead, on matters like regeneration, a new Code of Conduct, resources for Emergency Planning – councils simply want to be a substantial part of the solutions needed right now.

“NILGA is working with all councils and industry partners on driving our economy forward. We will raise these issues in the next few weeks when we travel to London as part of the UK’s four local government bodies meeting with Brexit Minister Steve Baker MP.

“We will also have committed to engage directly with James Brokenshire MP, the NI Secretary of State, Simon Coveney TD and the Committee of the Regions in Brussels,” he added.