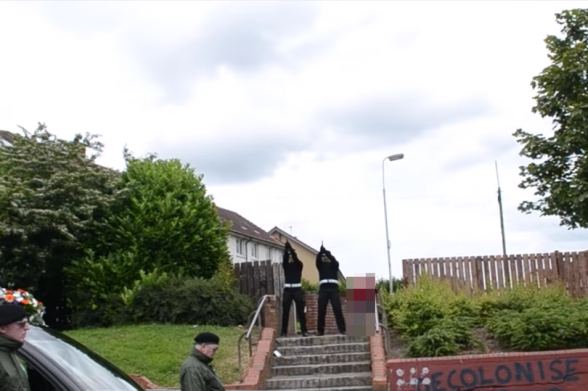 DETECTIVES from the PSNI’s Terrorist Investgation Unit probing shots fired over a coffin at an INLA funeral last month have arrested a man.#

Two men dressed in black clothing and masks fired a number of shots over the hearse carrying the coffin of IRSP/INLA member Barry McMullan.

The hearse was flanked by a number of men dressed in green bomber-style jackets, black berets and black sunglasses.

“He has been taken to Musgrave Serious Crime Suite where he is currently being interviewed.

“This arrest is in connection with an ongoing investigation into reports that shots were fired over a coffin in the West Belfast area on Tuesday 4th July 2017.

“Searches were also carried out last night in the Andersonstown area of West Belfast.”

During those searches a gun, cash and drugs were found.

DI Lowans added: “Police would appeal to the public to contact them with any information which could assist their enquiries by phoning either 101.