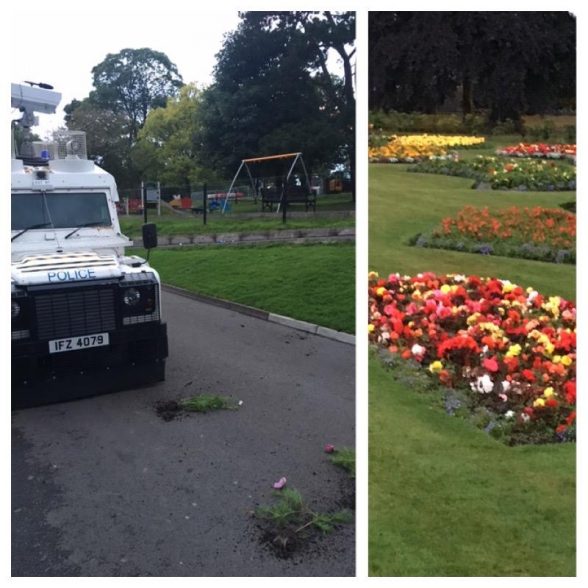 ANOTHER Day and more mindless damage was caused in Falls Park in west Belfast by a few brain dead idiots who wanted to spoil it for others.

The PSNI sent in an evidence-gathering Land Rover yesterday to record those pulling plants from flower beds and leaving them strew across the paths.

A PSNI spokesperson in west Belfast said: “We used it to record a youth behaving in a disorderly manner today.

“Later in the day, the same youth happened to think he was smart and hadn’t been seen, that is until we played the footage back to him.

“He has been issued with a Community Resolution Notice, with a condition that he doesn’t enter the park or Cemetery unless accompanied by an adult.

“This boy wasn’t the only one we took the details of for disorderly behaviour.

“There were three further youths who’s parents collected them.

“One has been issued with a Community Resolution Notice with the same conditions as above and the other two we intend to deal with in the same manner in the next few days.

In front of the truck you will see flowers that have been ripped out of the beds pictured and thrown across the park!

“WHY? We asked this the other night, WHAT KIND OF A PERSON ARE YOU?

“The facilities in the park are fantastic and beautiful, and all you can do is rip up flowers, try to start fires in bins or knock them over!

“You might think you’ll get away with it, we can assure you, YOU WON’T! WE’LL KEEP GATHERING EVIDENCE!

“Eventually you’ll get caught and like the boy at the start of the day, you won’t feel so smart then.

“Yet again it was only 5 or 6 idiots tonight who were ruining the park for everyone, including the 20 to 30 well behaved teenagers.”