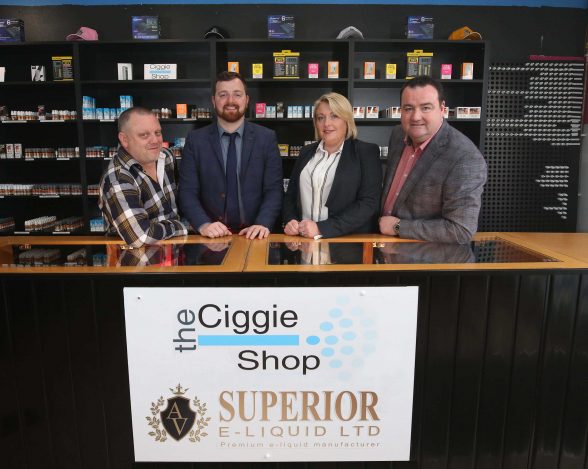 TWO of the country’s biggest vaping companies have merged their operations in a move that will see more than 60 new jobs created in Northern Ireland.

Last month, Superior E-Liquid became the only manufacturer in Northern Ireland to achieve government compliance for the UK market as part of the European Union’s Tobacco Products Directive (TPD).

The new relationship will see Superior manufacture a wide range of TPD compliant juices for The Ciggie Shop, which is Northern Ireland’s largest e-cigarette retailer with 16 stores province-wide, including its flagship store in Lisburn, one of the biggest e-juice retail spaces in Europe.

As part of the joint venture, 12 retail outlets owned by Superior will be rebranded and incorporated into The Ciggie Shop stable to create a 28-strong chain, with plans to open a further 30 stores in Northern Ireland by early 2018 and the potential to expand into the rest of the UK and Ireland.

Superior E-Liquid founder and managing director Stephen Ryan Jnr believes that combining resources will have major rewards for both organizations.

“This is a hugely exciting time for Superior and The Ciggie Shop in what is a rapidly growing sector and we believe that the combination of our manufacturing, distribution and retail resources will really put Northern Ireland on the map in the global e-juice and e-cigarette industry,” said Mr Ryan.

“As the fastest growing e-juice manufacturer in Europe, we currently distribute over 100,000 bottles of our award-winning juice on a weekly basis and by teaming up with the biggest retail chain on the island of Ireland, our volumes are going to increase significantly which will see new jobs created at our factory and substantial investment in technology and machinery.”

The move has huge benefits for The Ciggie Shop also, according to managing director Angeline Richardson.

“Our retail network will immediately increase to 28 stores,” explains Angeline, “with plans to double that by early next year.  The Ciggie Shop will now have a strong presence in the north west of the province and ultimately, our goal is to have a store in every town in Northern Ireland – as well as growing our business in other parts of the UK and in the Republic of Ireland.

“Another huge benefit of the joint venture is that all of our popular own label brands and flavours will now be made by Superior which means that customers can be assured that all of our products are fully TPD compliant.  This is absolutely crucial for the industry going forward – particularly in light of the new TPD laws that were introduced across Europe last month.

“Whether you’re a beginner, a daily user or a more experienced vaper, The Ciggie Shop will be a one-stop shop for everyone, offering customers the best value, TPD compliant products on the market… all made at home in Northern Ireland,” she added.

Superior E-Liquid was formed in February 2016 and now, little over a year later, is one of Europe’s fastest growing vaping companies, exporting its products to 15 countries worldwide from its factory on the Buncrana Road.

The company manufactures an extensive range of e-liquid brands as well as providing ‘own label’ products to vaping shops and retailers.

“With the new TPD laws being introduced across Britain, there is naturally a lot of confusion in the industry at the moment so it is vitally important that retailers who sell vaping products can now purchase from compliant companies such as Superior E-Liquid, safe in the knowledge that their products are designed, developed and created to exacting technical standards and have undergone full TPD analysis to ensure that they are fully compliant with EU regulations,” said Stephen Ryan Jnr.

“We have invested a huge amount of money in bringing Superior and its products to this point and our newfound relationship with The Ciggie Shop is an example that our TPD strategy was without doubt the right one.

“Whilst we now have a relationship with The Ciggie Shop group, that does not preclude us from working with independent shop owners who have shops in towns that we don’t have a presence.  So we would reach out to them also and invite them to contact us if they want to ensure that their products are fully compliant with the new TPD legislation,” concluded Mr Ryan.

About the Tobacco Products Directive (TPD)

Superior E-Liquid Ltd’s TPD compliance effectively means that the company is now registered with government agencies who are responsible for compliance testing, relating to both branded and ‘own label’ products, to ensure that they are fully compliant with new and existing EU regulations.

TPD is set to have a massive impact on the growth and development of the European e-cigarette industry and applies to all of the EU’s 28 member countries who must enact the directive into their own local law.

The new vaping laws include restrictions in e-liquid bottle and tank sizes, strict regulations on nicotine strength, new packaging and labelling requirements, and the banning of ingredients including colourings, caffeine and taurine.

ECigIntelligence has estimated that the European Union e-cigarette sector is worth approximately €2 billion, with a vaping population of almost 11 million.