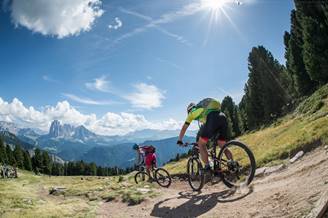 Italy, July 2017: Adler Dolomiti, which already has its own electric car that it loans to guests for Euros 40 per day, has further embraced eco forms of travel by opening its own e-mountain bike (e-MTB) store, less than a minute’s walk from the hotel’s front door.

The bikes can be borrowed, for free, on a first come, first served basis, allowing Adler guests to explore Val Gardena and the UNESCO World Heritage Site of the Dolomites, with minimal environmental impact.

Guests can take the bikes out on their own or with a guide. Adler Dolomiti’s in-house bike guide, Verena, leads daily rides of no more than 10 guests along different routes, which are accessible to all levels of rider as e-MTBs provide a level playing field, allowing beginners to advanced riders to cycle – and have fun – together.

Additionally, the MTB School in Ortisei (where the Adler Dolomiti is located) allows Adler guests to join their tours for free, providing access to more challenging routes for more experienced riders.

The Adler Dolomiti shop has 20 full-suspension and 10 half-suspension e-mountain bikes, plus 10 mountain bikes and four children’s (front suspension mountain) bikes for those aged between 6 and 12 years of age.

While e-mountain bikes have been much derided, their popularity has grown exponentially in recent years, as they have opened up cycling in the Dolomites to visitors of all ages, ability and fitness levels. Contrary to popular belief, however, they are not for the “lazy”.

As they are only performance assisted, riders still need to pedal so heart rates are raised and calories burnt as they would be on a manual bike.

It’s just that the “boost” function is particularly helpful when riding uphill and off-road – which is fairly often in the Dolomites! – and after a few hours in the saddle, when legs are weary, meaning that guests can travel much further distances than they would on a normal bike, allowing them to leave the car in the hotel garage and travel eco-style, because the reduced environmental impact of an e-bike (over a petrol or diesel car) cannot be ignored.

The landscape in which the Adler Dolomiti is located – amid the jagged peaks, high plateaus and jaw-dropping gorges of Val Gardena – particularly lends itself to e-mountain bikes.

The region has a 1,000km network of biking trails at altitudes between 700m and 2,450m, the highlight of which is the world-famous Sellaronda circuit, an amazing ski tour in winter that becomes a mountain bike route in summer.

But it’s not all tough, adrenalin action; Val Gardena is liberally endowed with mountain lodges at which to stop for fabulous panoramas and epicurean meals in the middle of the day that are well earned after a morning in the saddle!

Adler Dolomiti has a four-day “Bike Special” package in September (3rd to 7th)and October (1st to 5th), organised in conjunction with the MTB School Ortisei, for which guests can choose to use either an e-bike or an enduro mountain bike. It costs from €495 per person sharing a double room; it includes bike rental, an introductory day, two guided cycle tours and half-board accommodation, plus access to the Adler’s extensive spa and fitness area. Book online here.

Adler Dolomiti is accessible by flying to either Innsbruck or Verona, then to Ortisei by private transfer, rail or airport coach; the hotel has a large underground car park for guests arriving by car. 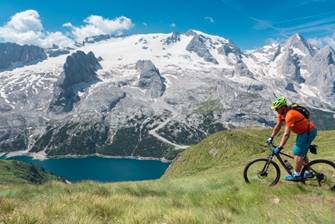