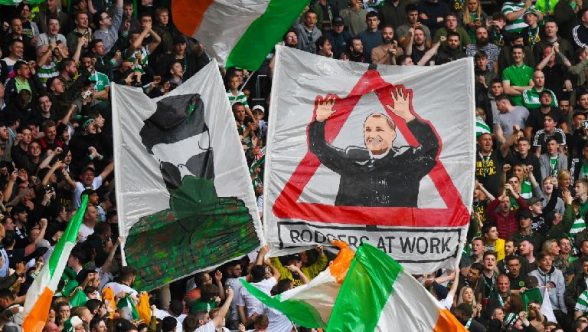 CELTIC have been hit with three charges by UEFA for the game against Linfield including the use of illicit banners.

One of the banners showed a figure wearing a black beret, black glasses and green camouflage jacket.

The second was of ‘RODGERS AT WORK’,  a play on the Provisional IRA ‘Sniper At Work’ sign which appeared along the border in the 1990s during the targeting of police and soldiers by a sniper concealed inside a modified car.

The Glasgow club were disciplined this afternoon after banners were used in the second leg of their Champions League qualifying round at Celtic Park.

The other charges against the club are for kit infringement and stairway blocking.

The charge of kit infringement is in regards to the shirt sponsors Magners being shown on substitutes bibs.

The case will be dealt with by the UEFA Control, Ethics and Disciplinary Body on July 28.

This is the second set of charges in as many games for Celtic in Europe.

They they were cited for the away tie against Linfield for improper conduct of the team as well as a charge for Leigh Griffiths for provoking the Linfield fans.

Linfield were also cited after a small number of fans threw items onto the pitch, including a bottle of Buckfast.

The south Belfast club has vowed to hunt down those behind the trouble and take robust action against them.