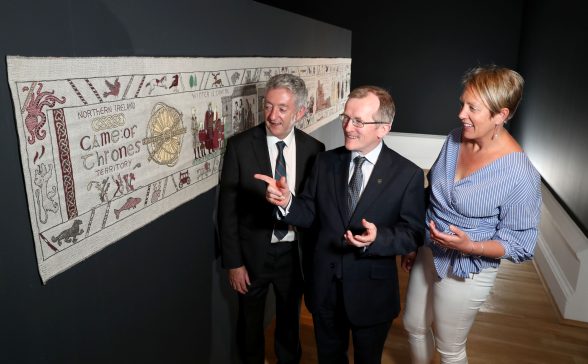 WITH fans having had to wait longer than usual, Game of Thrones® season 7 is finally upon us.

And, with the new season comes a brand new Tourism Ireland campaign that will showcase Northern Ireland once again as Game of Thrones® Territory to millions of fans worldwide.

With fewer episodes this season than ever (season 7 of Game of Thrones® will be the shortest yet, with just seven episodes), Tourism Ireland’s latest campaign, created in partnership with HBO, offers fans the chance to re-live their favourite scenes from the show all year long.

The campaign, which is supported by Tourism NI, will also be rolled out – by Tourism NI – in Northern Ireland and the Republic of Ireland.

This year’s campaign is bigger than ever before – featuring a 77-metre long, Bayeux-style tapestry which tells the story so far from season 1 to season 6.

The tapestry brings to life the trials and tribulations of the show’s characters in its most epic and famous scenes – complete with blood red weddings, golden Lannister hair, emerald green wildfire, cold blue White Walkers and jet black crows.

The tapestry will be woven from one enormous piece of linen supplied by Thomas Ferguson’s in Banbridge, one of the last surviving linen mills in Northern Ireland – giving fans a chance to re-visit all the key events which led to the season 7 premiere.

As season 7 unfolds, new sections of the tapestry will be revealed each week, in the build-up to the next episode, capturing key events from the previous week.

Tourism Ireland will share these new sections via social media – using a mix of cinemagraphs (“living” photographs), time-lapse videos of the weaving process, carousels and Instagram Stories – to bring the creation of the tapestry to life.

An exciting feature of the tapestry is that it will feature hidden cameo appearances by a number of famous faces who have appeared in the show.

Each element of the campaign will drive people to a special section on Tourism Ireland’s international website, Ireland.com/tapestry – where an interactive ‘Northern Ireland Game of Thrones® Tapestry’ web app will allow fans to zoom in and explore the tapestry in full, reliving some of their favourite scenes from previous episodes.

Fans can use the app to share those scenes with their friends, via social media, and can link to pages showing where they were filmed in Northern Ireland.

They can also start to build an itinerary for their holiday to Northern Ireland.

Niall Gibbons, CEO of Tourism Ireland, said: “We are delighted to continue our partnership with HBO for the fourth year running, to highlight Northern Ireland – through the exciting events of Game of Thrones® – on the global stage.

“TV and film are recognised as strong influencers on travellers everywhere and the stellar popularity of Game of Thrones® is a fantastic opportunity for us to promote Northern Ireland to a huge audience of potential visitors.

“Fans will see our ads, spiking their curiosity about the landscapes and locations featured in the series and inspiring them to come and explore them for themselves.

“Our specially created Game of Thrones® tapestry is another truly innovative way to showcase the destination – creating a lasting legacy and a new visitor attraction to enhance the Game of Thrones® experience here for fans when they visit.”

John McGrillen, CEO of Tourism NI, said: “Game of Thrones has been transformative for Northern Ireland as a screen tourism destination.

“The show has provided an opportunity for the tourism industry to develop new and innovative visitor experiences based on the Game of Thrones theme.

“This incredible tapestry gives visitors another way to explore the Game of Thrones story in Northern Ireland, adding to the 25 stunning filming locations and the Journey of Doors passport.”

The campaign kicks off today (Monday, 17 July) and will roll out across Facebook, Twitter, Instagram and YouTube in 12 markets – including Great Britain, the United States, Canada, Australia, France, Germany, Spain, Italy, the Netherlands, Scandinavia, India and the UAE. Tourism Ireland will also target its own social fanbase – posting and tweeting to its 4 million Facebook fans and more than 403,000 followers on Twitter globally.

It will build on the success of Tourism Ireland’s previous Game of Thrones® campaigns, including the 2016 ‘Doors of Thrones’ campaign which reached an estimated 126 million people around the world, with the campaign’s various short films being viewed 17 million times, generating coverage worth about £11.3 million.

The ‘Doors of Thrones’ campaign has racked up over 30 awards and accolades from the marketing and advertising industry across Europe and the United States, including three prestigious Lions Cannes awards.