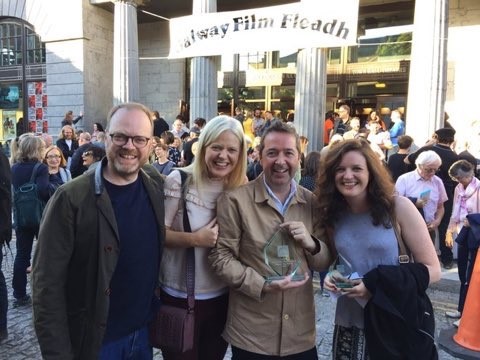 The team from Below the Radar at the Galway Film Fleadh. L-R: Trevor Birney, Máire Bhreathnach, Michael Fanning and Mairéad Ní Thréinir.

TWO films directed and produced by Belfast based production company Below The Radar have won two major awards at the prestigious Galway Film Festival this weekend.

ROCKY ROS MUC won for its gritty story about Sean Mannion, the Connemara boxer, whilst TIT FOR TATT follows the experiences of two cancer survivors who were inspired to mark their battles by getting tattoos on their surgery scars.

ROCKY ROS MUC will go on release in cinemas in New York and Los Angeles in the Autumn, meaning it will qualify for the chance to be shortlisted for an Oscar at the 2018 Academy Awards.

Trevor Birney, CEO of Below the Radar said today:

“We are thrilled to have won two outstanding awards at such a prestigious and important festival.

“This is a reflection of the talent, hard work and dedication of the producers and directors at Below the Radar, in particular Michael Fanning, Máire Bhreathnach and Mairéad Ní Thréinir.

“The Oscars are now on the horizon for ROCKY ROS MUC which will be shown in cinemas across the US in the Autumn.

“We would also like to take the opportunity to thank our funders. These awards are a reflection of our established and emerging talent at Below the Radar and we are looking forward to producing more captivating documentaries in the near future.”

“We have had a phenomenal response to the film since it was first screened in Boston in the spring.

“Being able to show it in Galway has been a homecoming in terms of the documentary, where Sean’s friends, family and supporters watched his emotional story on the big screen for the first time.

“The audience response in Galway and the award from the panel of judges will catapult the story of Sean Mannion right across the globe.”