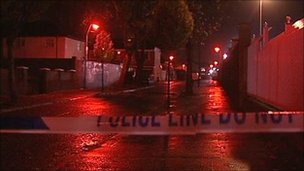 The PSNI and Army Technical Officers were called to Coolnasilla Park West shortly just before midnight.

The area was sealed off for examination a number of residents were moved from their homes.

This morning police confirmed a viable device had been found.

A PSNI spokesman said: “The security alert at Coolnasilla Park West in Belfast is over.

“A viable device was located, made safe and taken away for further examination.”

Detective Inspector Paul Rowland said: “A number of residents were moved from their homes during this alert and we are thankful to them for their patience.

“Those who left this device in a residential area clearly have no regard for the people who live here and I am appealing for the community’s support in identifying the perpetrators.

“Anyone with information is asked to contact detectives at Musgrave Police Station by calling 101, quoting reference 1419 15/07/17.”

Information can also be given to the Crimestoppers charity anonymously on 0800 555 111.