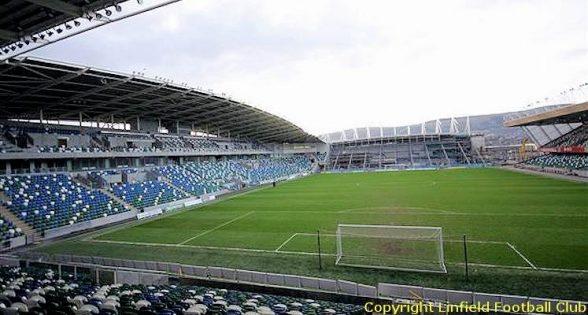 Mouth watering tie between Linfield and Celtic being played next Friday at Windsor Park. PIC: Courtesy of Linfield FC

And the Blues insist they are ‘looking forward to a massive challenge against the Scottish champions’.

Celtic are not taking up their ticket allocation for the game.

David Healy’s men secured a money-spinning tie against Brendan Rodgers’ side after battling to a scoreless draw at La Fiorita to complete a 1-0 aggregate win.

The Irish League champions were defending a slender advantage from the first leg at Windsor Park in Belfast, secured by a late goal from substitute Jordan Stewart.

It’s the first time Linfield have booked their place in the second qualifying round since 2012/13 and the first leg of the highly anticipated clash against the SPL giants is pencilled in for next Friday, July 14 at Windsor Park in south Belfast.

Linfield released the following statement regarding match arrangements for the all-ticket first leg tie, after their win over La Fiorita on Tuesday night.

“Following our success in San Marino on Tuesday evening, the club is making preparations for the second qualifying tie against Celtic.

“The first leg will take place at Windsor Park on Friday 14th July with a 5.00 pm kick off.

“This will be an all ticket game.

“The club has been working with the relevant authorities and with Celtic Football Club to make provisional arrangements for this game.

“No tickets will be made available to away fans for this fixture.

“Full details of ticket arrangements for the game will be published on Wednesday afternoon and it is expected that sales will commence on Thursday.

“We appreciate the continued cooperation from supporters as we put plans in place for the second qualifying round.

“We will also announce arrangements soon for supporters wishing to travel to the away tie in Glasgow.

“The manager, staff and players deserve enormous credit for their achievement in progressing through to the second qualifying round.

“We now look forward to a massive challenge against the Scottish Champions Celtic and it should be a great occasion for everyone associated with the club.

“Both Linfield and Celtic Football Clubs have proud traditions representing their countries in European football and we anticipate great sporting occasions in both Belfast and Glasgow on 14th and 19th July.”