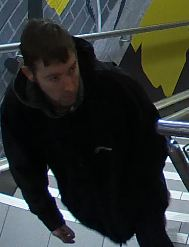 DETECTIVES investigating the circumstances surrounding the sudden death of a man in Belfast in February have issued images of two individuals they believe may be able to assist them.

Police are continuing to make inquiries regarding items belonging to the 31-year-old.

Detective Inspector McCambridge said: “We know Brendan was in the company of two men at a fast food restaurant on Donegall Place at around 6.15pm on 18 February, a short time before he collapsed.

“Brendan’s death is not being treated as suspicious, however, we are still seeking to identify these males as we work to establish the exact circumstances leading up to his death.

“Brendan was known to have been in possession of a Nokia touchscreen phone before his death, but the phone was not found with him after he collapsed.

“We are keen to find this phone as it may contain information which could assist us with our enquiries.

“Brendan’s family would also appreciate the return of the phone as it contains photographs of great sentimental value to them.

“I would like to take this opportunity to appeal to the two men that were with Brendan that night to come forward and tell us what they know.

“Detectives can be contacted at Musgrave Reactive and Organised Crime on 101.”