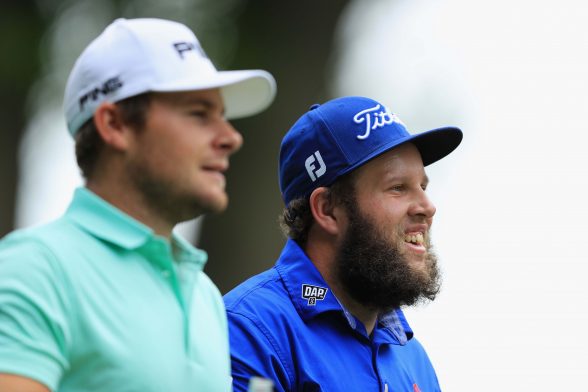 VIRGINIA WATER, ENGLAND – MAY 28: Tyrrell Hatton and Andrew Johnston of England during day four of the BMW PGA Championship at Wentworth on May 28, 2017 in Virginia Water, England. (Photo by Richard Heathcote/Getty Images)

RYDER Cup stars Thomas Pieters and Ian Poulter are among the latest luminaries confirmed in the star-studded field for the Dubai Duty Free Irish Open hosted by the Rory Foundation, along with fan favourite Andrew ‘Beef’ Johnston.

As Portstewart Golf Club prepares to host what is expected to be the strongest field in the event’s long history, Pieters, Poulter and Johnston join a long list of superstars who have already been announced for the island of Ireland’s national Open.

As the third Rolex Series event of the 2017 Race to Dubai, the Dubai Duty Free Irish Open will feature a record US$7 million prize fund, with a plethora of the biggest names in the game set to battle it out on another of Northern Ireland’s iconic links courses.

Tickets are selling fast after the last two Northern Irish editions of the event sold out, but with just under two weeks to go, there are still some available at www.dubaidutyfreeirishopen.com.

World Number 26 Pieters of Belgium made a huge impression on his Ryder Cup debut at Hazeltine National last year despite Europe’s defeat, while Poulter has become one of the greats of the modern Ryder Cup era.

Johnston, meanwhile, rose to fame last year winning the Open de España at Real Clube Valderrama and has since become one of the biggest crowd-pleasers in the game thanks to his sense of humour and unassuming demeanour.

The famously knowledgeable and supportive Northern Irish fans will also have the opportunity to see rising Spanish prodigy Jon Rahm for the first time while Olympic Gold Medal winner Justin Rose will play the event for the first time in seven years.

Tommy Fleetwood, who finished in outright fourth place at Erin Hills last week and currently sits in second position on the Race to Dubai Rankings Presented by Rolex, is another one of those already announced for the 90th edition of the Dubai Duty Free Irish Open.

Home-grown Major winners Darren Clarke, Padraig Harrington and Graeme McDowell will return for their national championship as will Shane Lowry, who won this tournament as an amateur in 2009, and rising star Paul Dunne.

Jamie Donaldson and Søren Kjeldsen, both of whom won this event on Northern Irish soil in 2012 and 2015 respectively, will return hoping to repeat their successes, while English trio Matt Fitzpatrick, Andy Sullivan and Chris Wood complete the compliment of 2016 Ryder Cup players in the field alongside World Number 32 Rafa Cabrera Bello, McIlroy, Pieters, Rose, Westwood and Willett.

Of the remarkable field gathering for the third of eight Rolex Series events, McIlroy said: “This is certainly one of the strongest fields I’ve ever seen for the Dubai Duty Free Irish Open, if not the strongest. It’s really shaping up for an incredible week.

“Everybody knows how special this tournament is to me, and to return to Northern Ireland as defending champion, with my Foundation again hosting the event, is real honour.

“The Northern Irish fans are renowned the world over for their great support.

“The last two tournaments here in 2012 and 2015 were both sell-outs and the atmosphere was something else.

“I expect it to be the same this time with a field of this depth and such a great venue at Portstewart.  So, those who haven’t got tickets yet should really do so before it’s too late.”

Tickets to see McIlroy, Matsuyama and the numerous other superstars at the Dubai Duty Free Irish Open hosted by the Rory Foundation are on sale at www.dubaidutyfreeirishopen.com, and begin at £20 for Pro-Am Wednesday, with tickets for Thursday andFriday costing £40 and day tickets for the weekend costing £45.

An adult season souvenir ticket, which covers six days of world class golf from Tuesday to Sunday, costs just £100 (a saving of £105 over the course of the five days).

Official Hospitality packages are also available on the ticketing page, or alternatively contact the European Tour’s dedicated Hospitality Sales Team, who will be happy to answer any queries and discuss the various hospitality options, on enquiries@europeantourhospitality.com or +44 (0)1344 840681.