OVER 260 CANNABIS PLANTS SEIZED IN POLICE RAID ON DRUG FACTORY 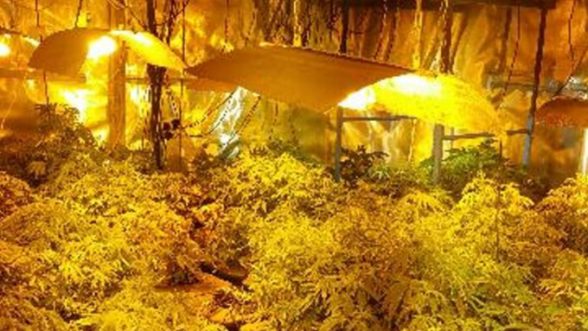 THE PSNI’s Reactive and Organised Crime branch has uncovered a suspected cannabis factory.

It follows the search of commercial premises in the Wellington Street area of Lurgan this morning (Friday 16 June), at around 11.30 am.

Detective Inspector Keith Gawley said: “When this property was searched, we discovered more than 260 cannabis plants and evidence that the electricity supply had been tampered with.

“He was also arrested on suspicion of dishonestly causing electricity to be diverted. He is currently in custody, helping with our enquiries.

“Good police work means that we have interrupted the cultivation of cannabis and removed a significant quantity of drugs from sale.

“We are committed to tackling the issue of drugs and would appeal to the public to speak to us if they have any concerns or information regarding drugs in their area. The number to call is 101.

“Alternatively, information about crime can be passed via the independent charity Crimestoppers, on the number 0800 555 111.”