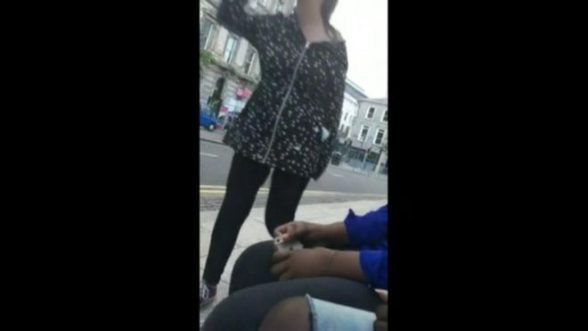 POLICE have questioned a ‘homeless’ woman over the racial abuse of three teenage girls in Belfast city centre last Saturday.

Chief Inspector Gavin Kirkpatrick said: “Following information provided by the public, a 30 year old woman has been interviewed by police investigating an incident during which racial abuse was directed towards three teenage girls at Donegal Square West in Belfast city centre on Saturday 10 June.

“A report will now be submitted to the Public Prosecution Service.”

Video footage taken by one of the victims was shared on social media.

The woman shouts at the girls: “See yous, give about five/ten f***ing months you’ll be out of here.

She is later heard saying: “I’m a f***ing prod and I’ve been homeless for the past f***ing, three f***ing years, where they walk into the country and get f***ing everything – work that one out.”

As the woman appears to walk away, one of the girls on the bench can be heard saying, “First of all we were born here.”

To which she replies, “Wha [sic] you were born here?”, before the video ends.