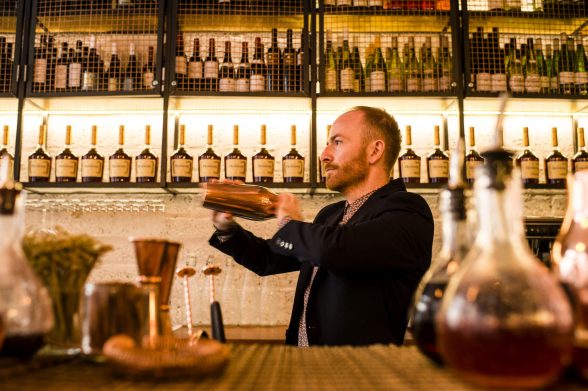 THE competition that gives Northern Ireland’s top bartenders the chance to win a prestigious training scholarship with the world’s most iconic cognac brand is back.

Now in its third year, the Hennessy Connoisseurs Challenge invites local bartenders to mix, muddle, shake and stir their way through a set of challenges in front of a top panel of cocktail experts.

Dillon Bass – owners of the Hennessy brand in Northern Ireland – is igniting the competition once again, calling on local bartenders to put their mixology skills to the test.

Bartenders from across Northern Ireland will go head to head this summer, competing for the chance to win one of three career-enhancing training scholarships.

The incredible prize package includes includes a VIP all expenses paid trip to Cognac to visit Maison Hennessy and Chateau Bagnolet, where they will receive one-on-one training and a tasting with Hennessy’s master blender. The winners will also have their signature drinks showcased on Hennessy’s digital platforms.

This year’s winners will join a growing cast of Hennessy Connoisseurs in Northern Ireland including bartenders representing Muriel’s Café Bar, The Albany, sixty6, The Merchant Hotel and Deanes EIPIC.

Previous winners have praised the competition as one of the most exciting opportunities available to local bartenders in Northern Ireland.

Belfast bartender, Frankie Cosgrove was one of the original Hennessy Connoisseurs in 2015, when he represented cocktail bar and club, sixty6. Following his success in the competition, he has gone on to secure a new role at Belfast’s Bullitt Hotel.

Commenting on his experience, Frankie said: “Having won the Hennessy Connoisseurs Challenge in 2015, I had the opportunity to travel to France to witness first-hand the production of the world’s best Cognac from grape to glass. The passion, the detail and the tenacity that is involved in making every bottle of Hennessy to such a high standard is truly inspiring.

“In addition, the media coverage, exposure and the on-going rewards has been second to none. It was a once in a lifetime experience that keeps on giving. The competition really has brought about a real feeling of community to the local bar-trade and the hospitality industry; with previous winners encouraging others to put themselves forward for this incredible opportunity.”

Ryan Adair, formerly a mixologist at The Merchant Hotel was one of the Hennessy Connoisseurs Challenge winners in 2016 and is now working as a brand ambassador in London. Encouraging local bartenders to enter this year’s competition, he said: “Visiting Hennessy in Cognac was a once in a lifetime experience for me. Winning the competition gave me the drive and confidence to pursue and continue my career in London, which has lead on to great things.”

The international judging panel includes Vincent Borjon-Prive from Hennessy; Edmund Weil from London’s award-winning, Nightjar and Oriole Bars and Aaron Wall from London Cocktail Club. The esteemed panel of judges will put the bartenders through their paces, assessing them on a signature Hennessy cocktail, as well as their skill and product knowledge at a live final at The Muddlers Club in Belfast on Monday 21st August.

Commenting on the launch of the Hennessy Connoisseurs Challenge 2017, Laura Blair, brand manager for Hennessy at Dillon Bass, said:

“Building on the success of our Hennessy Connoisseurs Challenge over the last two years, we are proud to offer local bartenders an incredible opportunity to win this unrivalled training scholarship.

“The competition has grown to become one of the most coveted opportunities for mixologists in Northern Ireland, with previous winners using their heightened profile to enhance and progress their careers.

“In our search for the next generation of Hennessy Connoisseurs, we are seeking to uncover Northern Ireland’s most innovative bartenders; those that demonstrate, passion, skill and enthusiasm for their craft, bringing the spirit of Hennessy alive in their creations.”

Entries are now open for the Hennessy Connoisseurs Challenge 2017 and can be submitted online at www.HennessyNI.com until Friday 14th July.