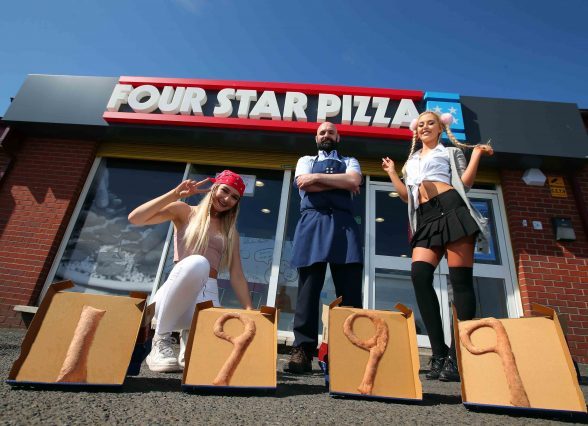 BACK in 1999, The Matrix and Toy Story 2 were setting the box office alight, the Y2K bug had us all panicking, and the game changed forever for pizza lovers in Northern Ireland, as Four Star Pizza opened its first ever store on the Beersbridge Road in East Belfast, which this month is celebrating its 18th birthday.

To celebrate this, Four Star Pizza has stepped back in time to 1999 and is encouraging its customers to do the same, according to Four Star Pizza Director, Brian Clarke.

“This is a big month for Four Star Pizza as we celebrate 18 years in Northern Ireland, so we’re going to have some 1999-themed fun including asking our customers to send in photos of themselves from the 90s.

“We’re also giving away some fantastic prizes on our Facebook page and also with Q Radio as well as introducing an incredible new meal deal on the 29 May which will run for one week – *buy one pizza and get the other for 99p.

“As well as our original Northern Ireland store in East Belfast, four other Four Star Pizza stores are celebrating this month, with our Kennedy Way store in West Belfast turning Sweet 16, our Derry store turning 9, the Lisburn Road store in Belfast turning 15 and our store in Drumahoe celebrating its first birthday, so we are going big to celebrate,” said Brian.

In the year that JK Rowling released her book, Harry Potter and the Prisoner of Azkaban, Grand Designs aired its first ever episode and we were still saving our files on floppy disks, a big debate had the whole world talking and Four Star Pizza is asking that same question again in 2017 – Britney or Christina?

“Pop megastars Britney Spears and Christina Aguilera faced off big time in 1999 for the title of ultimate pop princess.

“Even now people still have an opinion on which one really is the best, and while some would say we’re foolish to reignite this debate, we’re not afraid to ask the big questions at Four Star Pizza!,” continued Brian.

Make your voice heard and visit Four Star Pizza’s Facebook page and vote for everyone’s ‘Genie in a Bottle’, Christina or if you want to ‘Hit Me Baby One More Time’, then vote for Britney.

As well as voting, Four Star Pizza is asking everyone to rummage in their old shoe boxes and manila folders, dig out photos of themselves from the 1990s and post them online using #FourStarPizza1999 to ^win a pizza party for ten people or one of four runner up prizes of **dinner for two.

“Maybe you have a photo of you in some 90s fashion favourites like dungarees, or dressed like your favourite sports star or music act?

“Did you wear your hair like All Saints or the Spice Girls, copy the dance moves of Steps or were Blur and Oasis your fashion inspirations?

“Maybe you were still at school and have an embarrassing school portrait which you’d like to share or were you still a baby?  Send in your snaps and you could win some fabulous prizes!” Brian concluded.

Send in your 90s themed snaps using, #FourStarPizza1999 when uploading your photos to social media and you could be a winner, winner, pizza dinner!