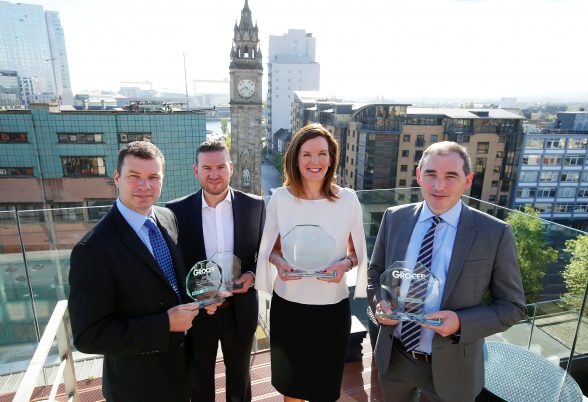 MUSGRAVE and its leading independent retailers SuperValu and Centra scooped the top gongs at the Ulster Grocer Marketing Awards which took place recently at the Culloden Hotel, Co. Down.

SuperValu picked up two awards after the Musgrave brand was recognised for its investment in the local Agri-Food sector, winning Best New Product Launch for its ‘Best Beef Ever’ campaign and Best Artisan Food Campaign for the ‘Meet the Makers’ regional showcase across over 30 stores.

“We’re delighted to be awarded for our work across both our SuperValu and Centra brands at the leading grocery marketing awards in Northern Ireland.

“SuperValu’s Best Beef Ever and Meet the Makers campaigns were an integral part of Northern Ireland’s Year of Food and Drink with our Lead Chef Ambassador, Noel McMeel.

“Our Best Beef Ever was recognised as top for taste and quality and this is the second award we’ve received as it won the Agri-Food innovation award at the UTV / Business Eye awards last year,” he continued.

“Our customers appreciate the work we do to bring them, best quality, local produce, whether that be 21 days matured beef, “our best beef ever” or showcasing our local artisan suppliers in-store as part of “Meet The Makers” sampling road-show. It’s extra special though when the industry recognises that work too,” he said.

“We are very proud to have been highly commended for Musgrave and its independent SuperValu and Centra retailers’ long-term credible and impactful charity partnership which has been developed over 15 years.

“It’s also fantastic to be recognized for Centra’s Christmas marketing campaign, which was focused on connecting with as many customers as possible and making Christmas relevant to them,” Desi added.