NI FESTIVAL LOVERS SAY THEY ARE OPEN TO ROMANCE 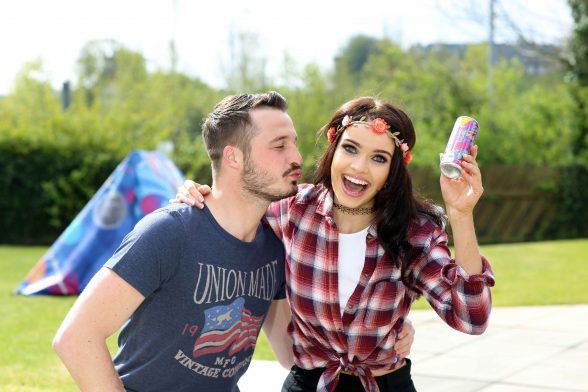 ROMANCE IS MUSIC TO NI FESTIVAL GOERS EARSFestival goers Anna Henry and Taylor Kirk arent ruling out romance at one of this summers festivals following the results of a survey by Boost which found that 62% of NI music lovers admitted they would be up for finding romance at a festival.

AS local fans prepare for the busy summer festival season, Boost has carried out a survey to find out the favourites of Northern Ireland’s music lovers.

To celebrate the launch of its new Limited Edition Pomberri Blast flavour, which is the perfect accompaniment to festivals, the leading drinks company asked the NI public to tell them their favourite things about the hottest summer music events.

Belfast Vital was named the favourite festival with 26% of the vote followed by Belsonic with 18% and in third place was Glastonbury with 16%.

Calvin Harris was crowned the ultimate festival act with 39% and in second place was Coldplay with Chris Martin’s band receiving 27% of the vote.

Despite an overwhelming 100% of those surveyed saying they have never found romance at a festival, 62% of Northern Ireland’s festival goers said they wouldn’t rule it out.

“The sugar free, great-tasting Pomberri Blast flavour has arrived just in time to get people in the summer festival spirit infusing pomegranate and blueberry into one flavoursome Boost with only 10 calories.

“To mark the launch of this fabulous new flavour, we wanted to find out what festival-goers in Northern Ireland loved most.

“It’s great to see that two local festivals are close favourites, with Belfast Vital topping the leader board followed closely by Belsonic.

“And with 62% saying they are open to finding romance, you might just meet your next partner at a festival this summer.”

As part of Boost’s latest release #BOOSTIVAL is currently taking place with social content and competitions to celebrate the new flavour with NI consumers having the chance to win Ticketmaster vouchers and festival kits.

For more information and the chance to win some other great prizes check out Boost NI’s Facebook page (www.facebook.com/BoostDrinksNI/).