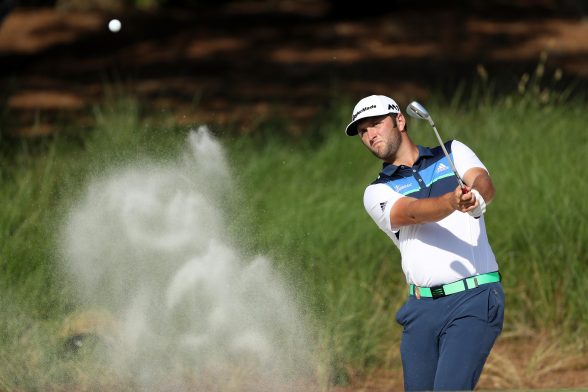 PONTE VEDRA BEACH, FL – MAY 11: Jon Rahm of Spain plays his third shot at the par 4, 14th hole during the first round of THE PLAYERS Championship on the Stadium Course at TPC Sawgrass on May 11, 2017 in Ponte Vedra Beach, Florida. (Photo by David Cannon/Getty Images)

SPAIN’S Jon Rahm, one of world golf’s most exciting young talents, has confirmed his participation in the Dubai Duty Free Irish Open hosted by the Rory Foundation.

The World Number 12 will join Rory McIlroy, Justin Rose and a host of the world’s top golfers at Portstewart, from July 6-9, in what will be the third of eight world class events as part of the European Tour’s new Rolex Series.

Following an impressive amateur career during which he was the number one ranked player, Rahm has enjoyed a meteoric rise over the past 12 months, bursting onto the professional scene with six top 25 finishes in nine starts on the PGA Tour last season before his breakthrough win in the Farmers Insurance Open in January.

He became a European Tour member at the start of March after breaking into the world’s top 50, and finished tied third on his first start in the WGC-Mexico Championship before reaching the final of the WGC-Dell Technologies Match Play, where he took World Number One Dustin Johnson to last hole.

Rahm finished tied 27th in the Masters Tournament on his first visit to Augusta National last month, and the 22 year old is currently ranked third on the Race to Dubai after his strong start to his European Tour career.

“As a European, it has always been an ambition of mine to be part of the European Tour and hopefully one day play in a Ryder Cup, so I can’t wait to get going.

“I have some great memories as a kid watching the Spanish players competing in the big European Tour events on TV and it will be special to be able to now play in them myself.

“Obviously Seve, José Maria and Sergio have all won the Irish Open over the years, so it will be great to try and follow in their footsteps at Portstewart.

“Also, I’m really pleased to support Rory and everything he is trying to do for the event through his Foundation.

“The Rolex Series is a fantastic idea on the European Tour and I’m looking forward to being a part of it.

“I’m also looking forward to playing a different style of golf on the links of Portstewart which will be valuable preparation for The Open Championship at Royal Birkdale as well.”

Tickets to see Rahm at the Dubai Duty Free Irish Open hosted by the Rory Foundation are on sale atwww.dubaidutyfreeirishopen.com, and begin at £20 for Pro-Am Wednesday, with tickets for Thursday and Friday costing £40 and day tickets for the weekend costing £45.