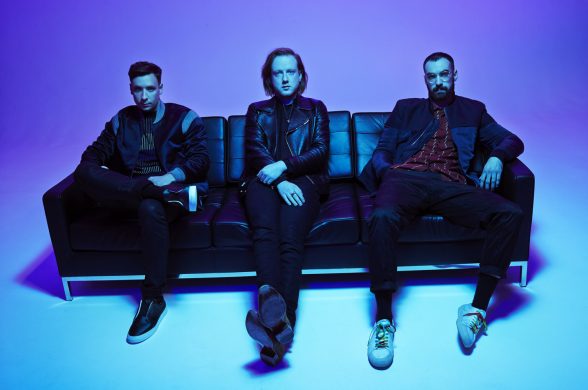 Co Down indie rock stars Two Door Cinema Club will be joining forces with Rory McIlroy for their only Northern Ireland appearance this year with a special homecoming performance to open the 2017 Dubai Duty Free Irish Open hosted by the Rory Foundation.

LOCAL indie rock stars Two Door Cinema Club will be joining forces with Rory McIlroy for their only Northern Ireland appearance this year with a special homecoming performance to open the 2017 Dubai Duty Free Irish Open hosted by the Rory Foundation.

The County Down trio, who hail from Bangor and Donaghadee, will make history by becoming the first ever major recording artists to perform at the Dubai Duty Free Irish Open when they take the stage at Portstewart Golf Club as part of the opening ceremony on the evening of the tournament Pro-Am on Wednesday July 5.

Band members Sam Halliday and Kevin Baird are keen golfers and, along with lead singer Alex Trimble, are excited at the thought of officially opening what is widely expected to be the biggest Dubai Duty Free Irish Open in the tournament’s 90-year history.

“It’s a huge honour for us to headline the opening ceremony at such a major sporting event on home soil,” said Sam.

“It’s been fantastic to see how the Dubai Duty Free Irish Open has grown in recent years, particularly since Rory McIlroy and his Foundation became involved.

“Kevin and I are big golf fans and we try to play when and where we can so we’re hoping to take part in the Pro-Am during the day and give Rory and Justin Rose a run for their money before we take to the stage in the early evening.

“We’re really excited to be involved and can’t wait to return home for our only Northern Ireland performance of the year.”

“The fact that this is the band’s only Northern Ireland performance this year makes it even more special and adds yet another level to what promises to be a really wonderful festival of golf that continues to grow ever year.

“It also offers golf and music fans unbelievable value for money as the opening ceremony is included in the Pro-Am ticket price – which costs just £20 for an amazing day’s golf and music.

“With the addition of Two Door Cinema Club to our star-studded event, we’re really looking forward to teeing off this year’s Dubai Duty Free Irish Open in spectacular fashion.”

The serious business of the Dubai Duty Free Irish Open will get under way the following morning with play beginning on Thursday July 6 and finishing on Sunday July 9.

As part of the Rolex Series, with an increased prize fund of US$7 million, fans at this year’s event can expect to see Rory McIlroy defend his title for the first time against some of the world’s best golfers, with Justin Rose, Shane Lowry, Padraig Harrington, Graeme McDowell and Darren Clarke also confirmed to compete.

Tickets for the Dubai Duty Free Irish Open hosted by the Rory Foundation are on sale at www.dubaidutyfreeirishopen.com, and begin at £20 for Pro-Am Wednesday (July 5), with tickets for Thursday and Friday costing £40 and day tickets for the weekend costing £45.