A SENIOR PSNI commander has said a bomb left outside the gates of a primary school in north Belfast aimed at killing police officers was “significant in terms of its shape”.

The device was discovered by a passing police patrol near near Holy Cross Boys’ Primary School in Ardoyne in the early hours of yesterday morning, Sunday, April 23.

Pupils are due to return to the school today after the Easter break.

“It wasn’t a large device, but it was significant in terms of its shape,” Ch Supt Chris Noble said.

He said police officers on foot patrol were the likely target.

“Children this morning could have been walking by it,” Mr Noble said.

“Whatever fragments of these devices are projected, they’re going at some speed and some impact, so that could easily have penetrated a window and there are a number of very vulnerable people living nearby.”

He added: “There’s very few people, thankfully, who have even seen that device, let alone know what it is, so we want to keep some degree of discretion around the detail of it.

“We do believe it was focussed on killing police officers on foot.

“I think these individuals are becoming increasingly desperate and increasingly reckless. I think there’s a blood lust about what they’re trying to do.” 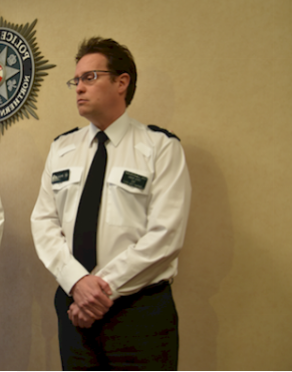 About 20 residents had to leave their homes during the security operation and were given shelter in a nearby community centre.

The chairman of the NI Police Federation, Mark Lindsay, said the attackers wanted to murder or maim officers.

“They didn’t care if passers-by or children out playing in the area were caught up in an explosion. It was an entirely reckless act,” he said.

“This appears to have been a deadly, anti-personnel-type weapon. Thankfully, it was recovered and removed without being detonated.

“The attackers are terrorising people who live in the area and preventing them from getting on with their everyday lives.”