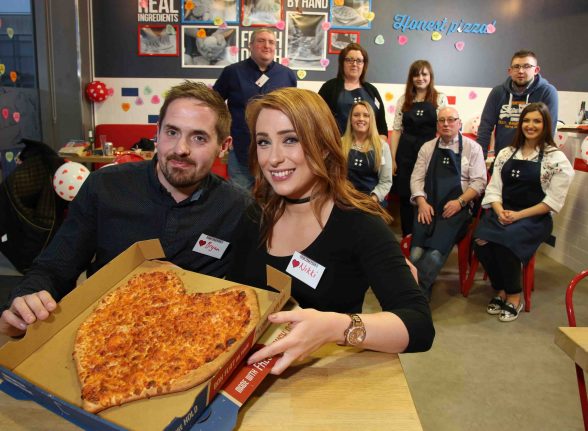 Hundreds of single people from across Northern Ireland responded to a love-inspired offer from pizza chain, Four Star Pizza, which promised to help them find a date, and maybe even love, based entirely on their pizza preferences. Twelve men and women were shortlisted to go on a date including Bryan Craig and Nikki Brady (foreground) where they enjoyed pizza making classes and a night of romance.

HUNDREDS of single people from across Northern Ireland responded to a love-inspired offer from pizza chain, Four Star Pizza, which promised to help them find a date, and maybe even love, based entirely on their pizza preferences.

So did Four Star Pizza, who have 12 stores in Northern Ireland, and who make their dough fresh in-store every day, succeed in finding anyone a date?

“These days there are many different ways for people to look for a potential love interest, including online, but for many, they just don’t work!

“So Four Star Pizza thought we’d try something different and see if the answers people gave about their pizza likes and dislikes could lead to a date.

“We’re delighted to say that pizza proved to be the missing ingredient for 6 men and 6 women who we sent on a first date to our store in Carrickfergus where they enjoyed pizza making classes and a candle lit meal for two.”

It wasn’t just the pizza oven and jalapeno peppers making temperatures rise as the ‘dough’ eyed couples became Four Star Pizza Doughologists for a night and made their own pizzas.

Brian continued:  “There was certainly chemistry with some of our couples so we can’t wait to hear how it goes with them.

“We already knew that pizza has the power to bring people together and now we know that pizza can even help people find a date.

“Another reason to love pizza!”

One of the daters, Bryan Craig, from Newtownards, said:  “The night went extremely well, as I made a strong connection with the lady I dated.  In fact, I am seeing her again very soon.”

But it didn’t go to plan for everyone as Bex Paden’s date didn’t turn up.

Bex said:  “My date was a no show but I had an amazing night making my own pizza and chatting to all the other daters.  But the best bit was enjoying a delicious Four Star Pizza.”

The Four Star Pizza questionnaire provided some other interesting insights into how singletons in Northern Ireland think.

43% of men and 42% of women thought that their best attribute was humour and when it comes to what they look for most in a potential partner, 33% of men said honesty and 48% of women said humour.

When asked who they would most like to share a pizza with, 36% of men said Holly Willoughby and 37% of ladies chose Tom Hardy as the dish of the day.

When asked what their single life anthem was, 33% of men said Bon Jovi’s, It’s My Life, whilst 34% of women chose Cyndi Lauper’s, Girls Just Wanna Have Fun.  Size really does matter to pizza lovers with 41% saying they preferred a 12 inch pizza and a hungry 19% of the Northern Ireland public choosing a 19 inch pizza.

40% said the best thing about being single is not having to share your pizza but a revealing 90% said they would like to eventually find love.

The Northern Ireland public couldn’t shed any light on the prickly question of whether or not to have pineapple on a pizza with a split 49% saying no to pineapple and 51% giving it the thumbs up.

One thing almost everyone agreed on however, 97% to be exact, was that pizza makes them happy.