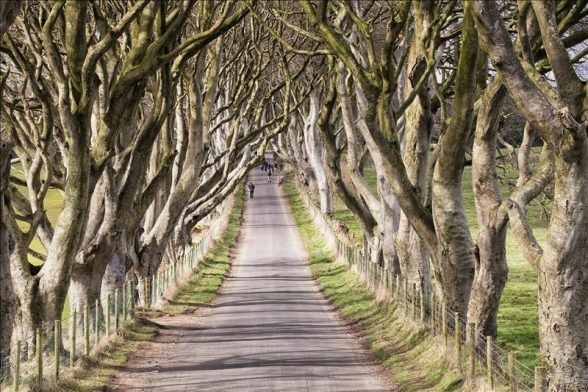 The Dark Hedges in Ballymoney, Co Antrim made famous in HBO’s Game of Thrones blockbuster

They were invited here by Tourism Ireland, in conjunction with Tourism NI.

As a result of this visit, more than 14 million potential holidaymakers will read all about our Game of Thrones® spectacular locations and our many great tourism experiences on offer.

On arrival in Belfast, the journalists enjoyed a sightseeing city tour, before travelling along the Causeway Coastal route, stopping off at various Game of Thrones® film locations en route.

These included the caves at Cushendun (Stormlands); the harbour at Ballintoy (Lordsport); and the Dark Hedges near Ballymoney (Kings Road), taking in the magnificent scenery en route.

The journalists also had a chance to see one of Tourism Ireland’s Game of Thrones® doors in Mary McBride’s Pub in Cushendun.

In County Down, the media explored Tollymore Forest near Newcastle, checking out where the opening scene in Series One was filmed; the Cistercian ruins at Inch Abbey (Robb Stark’s Camp) and discovered ‘Winterfell’ at Castle Ward and Audley’s Castle.

The group also had the opportunity to take part in a Game of Thrones® banquet at The Cuan in Strangford.

Niall Gibbons, CEO of Tourism Ireland, said: “We are delighted to have the opportunity to highlight our connection with the Game of Thrones® around the world and at the same time show off the spectacular scenery ofNorthern Ireland.

“By reading all about the landscapes and locations featured in the series, we hope it will inspire many more visitors from overseas to come and explore them for themselves.”

“Tourism Ireland is undertaking a busy programme of promotions throughout 2017, to build on the growth in overseas visitors to Northern Ireland.

“We are highlighting the Causeway Coastal Route as well as other iconic experiences like Titanic Belfast, the Giant’s Causeway and our unique National Trust properties as well as our world-renowned golf and food.”

Game of Thrones® fever is again on the rise with anticipation of the long-awaited seventh season happening in July.

Tourism Ireland is preparing to launch its latest campaign in the summer to showcase Northern Ireland to millions of Game of Thrones® fans worldwide.