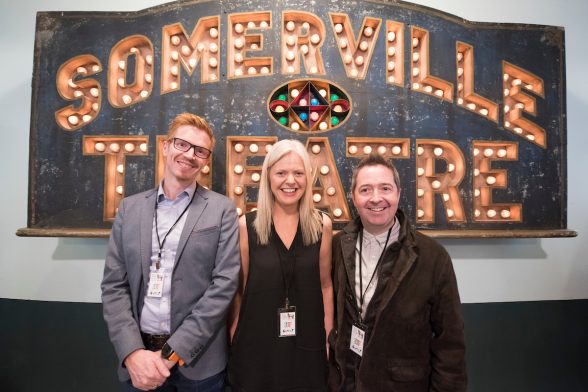 Author of Rocky Ros Muc Rónán Mac Con Iomaire, with the film’s Producer Máire Bhreathnach, and Director Michael Fanning, Below the Radar, at the world premiere in Boston.

A documentary directed and produced by Belfast based production company Below The Radar has won a major award at theBoston Irish Film Festival – the largest Irish film festival outside of Ireland.

The film – ROCKY ROS MUC – received a standing ovation at its world premiere at the Somerville Theatre in Boston to over 800 guests – the largest in the festival’s 17-year history.

ROCKY ROS MUC is a gritty film about the life of Galway boxer Seán Ó Mainnín who left the Irish-speaking village of Ros Muc in Galway, for Boston, in the 1970s.

The film examines Seán’s fighting spirit inside the ring as a professional boxer, and his life outside the ring where his sparring partners and friends at the time were at the heart of Whitey Bulger’s notorious Winter Hill gang and the South Boston criminal underworld.

The film was funded by TG4, MG Alba, BAI in Dublin, the Irish Film Board and Northern Ireland Screen’s Irish Language Broadcast Fund.

“TG4 are proud to be the broadcaster of Rocky Ros Muc. The world premiere at Boston Irish Film Festival was no doubt one of the highlights for Irish language film since TG4’s inception 20 years ago, a testament to the massive Irish language community and audience base for TG4 programming on the Eastern shores of USA and throughout the world. We look forward to broadcasting Rocky Ros Muc.”

“We were honoured to present the world premiere of Rocky Ros Muc as our Global Vision Documentary awardee this past weekend. The reception the film received in Boston was unprecedented, the screening sold out at the Somerville Theatre and people travelled for miles to see the film.

“Huge congratulations to Michael Fanning, Máire Bhreathnach and all the team, the film truly represents the best of Ireland and the Irish on screen.”

“We have been blow away by the reaction in Boston at the weekend. Winning the award and seeing and hearing the feedback from the record breaking audiences is testament to how powerful this story is.”

“I first came across Seán Ó Mainnín through Rónán Mac Con Iomaire’s book, Rocky Ros Muc. I was totally gripped. I’d never heard of him and the fact that Mannion’s name wasn’t a household one made me want to tell it all the more. Throw in the Irish of Dorchester and South Boston and the criminal underworld of James ‘Whitey’ Bulger and it was clear this was a story that would resonate beyond boxing. Mannion is a humble man. This is his story. But it’s so much more.”

“We are delighted that Rocky Ros Muc was so warmly received by the Boston Irish Film Festival audience. It is an intriguing story that stretches across the Atlantic which has been brilliantly told by the Below the Radar team. We look forward to it entertaining further audiences over the coming months.”

“We were delighted to support the creative team behind this project which tells a captivating story of not only Seán Ó Mainnín, but also thousands of Irish American emigrants like him, living in the infamous area of South Boston at the time. This universal story, told from an Irish perspective has clearly connected with US audiences and I’ve no doubt that this film will continue to find audiences around the globe.”