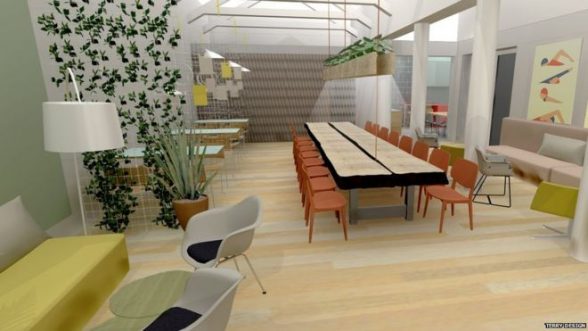 Inside of the new hi-tech hub at Ormeau Baths

THE former Ormeau Baths building in south Belfast is to become a co-working space for freelancers and small businesses.

The bulk of the listed Victorian building was last used as an art gallery until it closed in 2011.

A group of technology investors are to convert the site into a space with 140 desks and private offices.

Co-working spaces are common in many cities with companies like WeWork providing serviced desks on a month-to-month basis.

Mr Pette said: “We’re proud that the new Ormeau Baths will contribute to the physical regeneration to the city as well as the further evolution of the burgeoning tech sector here.

“We expect all of those who use it to have a similar mind set towards growth and collaboration.”

Mr Pette added that as well as a workspace, the site would provide people with access to mentorship, time with experts and assistance with funding and business development opportunities.

The building first opened as a public bathhouse in 1888; it closed in the 1970s before being reopened as a gallery in 1994.

Work on the building will get underway this month with an expectation of opening in May.