THE 2017 DUBAI DUTY FREE IRISH OPEN TO BE THE BIGGEST EVER!! 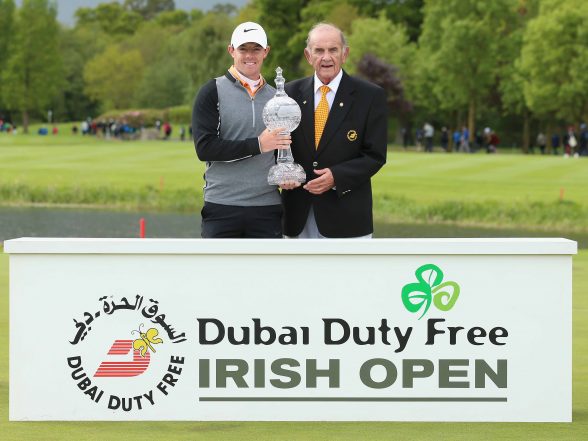 Rory McIlroy of Northern Ireland receives the Dubai Duty Free Irish Open trophy from Colm McLoughlin, the Executive Vice Chairman of Dubai Duty Free, after winning the tournament hosted by the Rory Foundation at The K Club on May 22, 2016 in Straffan. (Photo by Andrew Redington/Getty Images)

THE 2017 Dubai Duty Free Irish Open Hosted by the Rory Foundation is set to be the biggest in the tournament’s history, with an increased prize fund of US$7million to be matched by an enhanced fan experience outside of the ropes.

Four-time Major Champion Rory McIlroy will defend the title in front of his home fans at Portstewart Golf Club from July 6-9, adding another level of excitement to the island of Ireland’s national championship.

The announcement last November which confirmed the Dubai Duty Free Irish Open as one of the eight prestigious Rolex Series events also means it will benefit from increased investment across the board, enhancing the overall fan experience as well as the digital, broadcast and social media offering.

With a spectacular increase in prize-fund, up more than 60% from 2016, along with greater Race to Dubai points on offer, some of world golf’s biggest names will arrive on the County Derry coast with the aim of dethroning McIlroy and joining the esteemed list of Irish Open Champions.

Tickets for the 18th grandstand at Portstewart – which will enjoy an action-packed view of the 17th tee as well as the final green – have already sold out for Sunday, July 9, but tournament organisers have responded by adding 300 extra seats to increase capacity.

Those limited tickets, as well as general admission tickets, are on sale now at www.dubaidutyfreeirishopen.com.

A percentage of all ticket sales will be donated to the Rory Foundation which supports children’s charities around the world and is hosting the tournament for the third year running.

The two previous Northern Irish editions of the Dubai Duty Free Irish Open were both sell-outs – first in 2012 at Royal Portrush and then in 2015 at Royal County Down.

For those who cannot see the action up close, the stunning Northern Irish coastline will be broadcast around the globe to more than 450 million the homes, enjoying an increased eight hours of live coverage on Thursday and Friday, up from six in previous years, and six hours at the weekend, up from four.

Simon Alliss, the European Tour’s Championship Director for the Dubai Duty Free Irish Open hosted by the Rory Foundation, said: “This event has always been one of the highlights of the European Tour season and one of the biggest events on the Irish sporting calendar, but this year fans will be treated to a real festival of golf.

“As part of the Rolex Series, we have increased our investment in the overall fan experience and we are planning a host of announcements between now and the beginning of July, with some very exciting musical acts in the pipeline for our show stage.

“That, along with other enhancements in the tented village area – featuring interactive golf activities for all the family – and new on-course bar areas will give our fans a golf day out on a whole new scale.

“Tickets are already selling quickly and, with so many player and fan enhancement announcements to come, we fully expect the Dubai Duty Free Irish Open to be another sell-out.”

Colm McLoughlin, Executive Vice Chairman of Dubai Duty Free, said: “We are delighted, once again to be the title sponsor of the Dubai Duty Free Irish Open.

“This is our third year supporting this tournament and it is fantastic to see how much this event has grown in stature, and we look forward to once again returning to Northern Ireland following last year’s event at The K Club.

“The fact that the Rory Foundation will continue to host the event is also very important to us. We are also pleased that the Dubai Duty Free Irish Open is now part of the Rolex Series which will enhance both the competitive and entertainment experience and allows for an increased prize fund of US$7million.

“Portstewart is a stunning location and we are looking forward to welcoming our friends and golf fans from all over the world to this year’s Dubai Duty Free Irish Open in July.”

Tourism NI Chief Executive John McGrillen said: “As the tourism industry gears up to host the Dubai Duty Free Irish Open, the third Irish Open in the space of five years in Northern Ireland, we eagerly anticipate a week of outstanding golf, increased visitors and a sell-out event in Portstewart.

“This world class championship has gone from strength to strength since 2012 under the superb professional management of the European Tour and the personal commitment and energy of the Rory Foundation.

“Tourism NI, along with our partners in the Department for the Economy, Causeway Coast and Glens Council, PSNI, Translink and many others will be working hard over the next months to ensure we deliver a memorable tournament for locals, visitors and players and that we spread the economic benefits across the region this year and for years to come.”

Barry Funston, Chief Executive of the Rory Foundation, said: “This is the third year we have hosted the Dubai Duty Free Irish Open and we are delighted to see it back in Northern Ireland.

“The tournament enables us to build on our platform for positive change reaching into the community and developing innovate initiatives to help children in most need.

“A percentage of all ticket sales will go directly to the Rory Foundation enabling us to continue in our mission of helping children live better lives and we are looking forward to a sell-out event.”

Tickets for the Dubai Duty Free Irish Open hosted by the Rory Foundation, on sale at www.dubaidutyfreeirishopen.com, begin at £20 for Pro-Am Wednesday, with tickets for Thursday and Friday costing £40 and day tickets for the weekend costing £45.

Concessions are available for customers aged over 60 and between 16 and 21, while children up to 16 are permitted free entry when accompanied by a ticket holding adult.