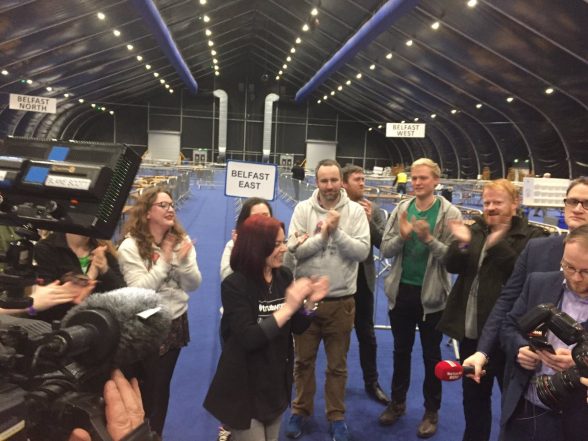 The party has come within a seat of drawing level with the DUP, which came into the election with 10 more seats.

Only 1,168 first preference votes separated the two parties and, for the first time, Unionists will not have an overall majority at Stormont.

In the final constituency of the night, Clare Bailey of the Green’s clinched the last seat in south Belfast, toppling Arlene Foster’s DUP cheerleader Emma Pengelly.

Her defeat is a huge blow for the DUP who was regarded as a possible future leader of the party.

But such a crushing defeat to the Greens means Pengelly will be out in the political cold for another five years until the next Assembly election.

Amid the fallout, Mike Nesbitt said he would resign as Ulster Unionist leader.

The election was called after the collapse of a coalition led by Arlene Foster’s DUP and Sinn Féin’s Martin McGuinness.

Sinn Féin and the DUP now have three weeks to establish a government: Under Northern Ireland’s power-sharing agreement, the government must be run by Irish nationalists and unionists together.

If a government cannot be formed within that time then, under law, another election will be called.

Ultimately, if no power-sharing government is formed, devolved power could return to the UK parliament at Westminster for the first time in a decade.

However, Theresa Villiers, a former Northern Ireland secretary of state, said that the UK government could legislate to give the DUP and Sinn Féin more time to negotiate or to introduce of direct rule.

“It’s not an outcome that the UK government would want, I think that every effort will be made to try and support the parties in finding a way forward,” said the Conservative MP. 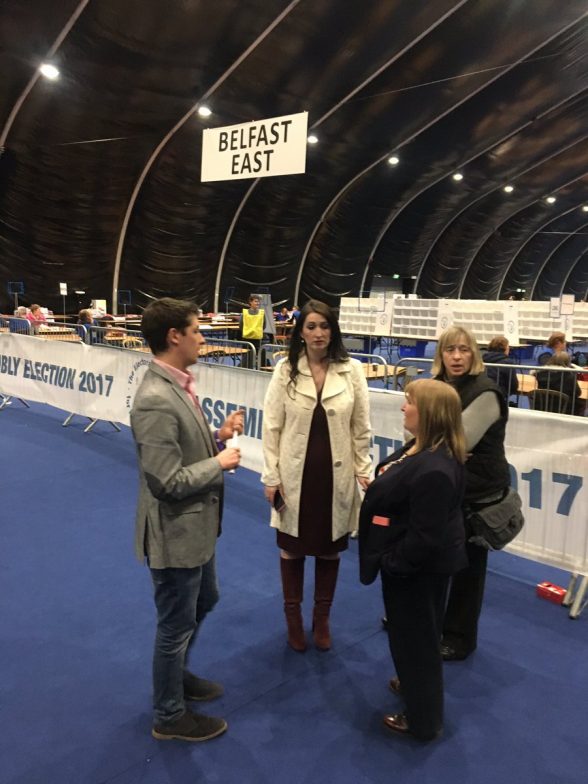 LITTLE COMFORT FOR EMMA.. DUP’S Pengelly failed to get elected in south Belfast

“But, ultimately, if at the end of three weeks they haven’t (agreed), then legislation is one option to give them more time or to return to direct rule.”

“If there isn’t an administration put in place then the Secretary of State for Northern Ireland is on a legal obligation to dissolve the assembly and have another general election, which I doubt will get us anywhere.”

A total of 64.8% of the electorate voted in the second Assembly election in 10 months – the highest turnout since the vote which followed the 1998 Good Friday Agreement and up 10 points on last May’s vote.

Mike Nesbitt won his seat at the Strangford count but shortly afterwards, he announced that he was quitting as UUP leader following his party’s poor performance.

Indicating that he will remain in position until his successor is found, he said his real regret was that Northern Ireland’s society appeared to have emerged from the election more polarised.

“Some day Northern Ireland will vote as a normal democracy,” he said. “We will vote in a post-sectarian election, but it’s now clear it will not happen during the duration of my political career.”

While Mr Nesbitt held his Assembly seat, other high-profile MLAs were not so lucky.

The SDLP’s Alex Attwood, the UUP’s Danny Kennedy, and the DUP’s Nelson McCausland and Lord Morrow were four former executive ministers who failed to secure a return to a Stormont legislature that is being cut from 108 to 90 members.

Other casualties include the UUP’s Jo-Anne Dobson, former DUP minister Jonathan Bell, who stood as an independent, and People Before Profit’s Eamon McCann who was elected as an MLA last May but lost his seat in Foyle.

Mr McGuinness resigned over Mrs Foster’s refusal to step aside as first minister pending an inquiry into the ‘cash for ash’ scandal which could cost the Northern Ireland tax payer £490m.