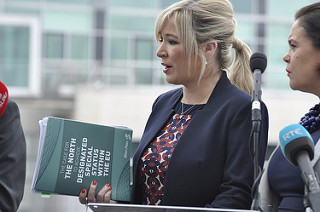 SINN Fein say a car belonging to one of its election agents was burned in an arson attack last night.

The party leader in Northern Ireland Michelle O’Neill condemned the arson as an “attack on the democratic process”.

Police say re hunting two masked males for arson after they burned a car with a petrol bomb last night.

The PSNI say that around 10.30 pm on Monday, 20 February, police received a report of a black Citroen C4 Picasso set on fire while parked in Towerview Crescent.

The window of the vehicle was smashed and a petrol bomb thrown inside.

Two masked males were seen in the area at the time.

District Commander, Superintendent Brian Kee said: “We are treating this incident as a hate crime and would like to hear from anyone who has information that may help our investigation.

If you prefer to provide information without giving your details you can contact the independent Crimstoppers charity anonymously on 0800 555 111.

In a statement, Sinn Fein’s Michelle O’Neill said:  “I absolutely condemn this arson attack by masked men on the car of a Sinn Féin election agent in Bangor.

“This is an attack on the democratic process but it will not deter the local candidate or anyone else in Sinn Féin.

“There are clearly those who are intent on turning this into a brutal campaign and sectarianising the election.

“I am calling on all party leaders to condemn this attack on democracy and send a clear message to those responsible that this will not be tolerated.

“Despite this and other attacks, Sinn Féin will continue to stand for equality and respect and integrity in the institutions,” she added.

Last month, Sinn Fein North Down Assembly candidate Kieran Maxwell and two party activists made complaints to the PSNI over hate crime posts about them on social media.