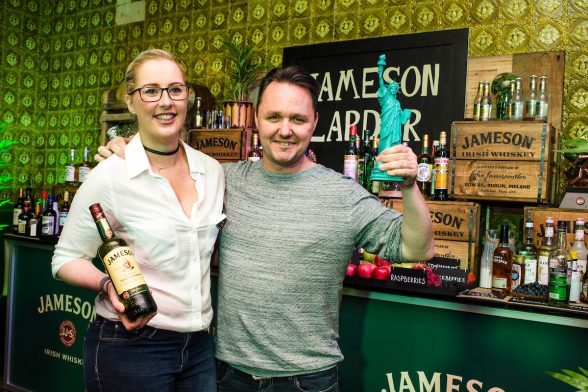 Eight of Northern Ireland’s Jameson Irish Whiskey loving bartenders battled it out this week at the grand finale of the Jameson NYC Experience competition, with a once-in-a-lifetime trip to New York up for grabs.

The winner will now travel to New York where she will gain behind the scenes access to the World’s Best Bar, The Dead Rabbit, and newly opened BlackTail at Pier A with Northern Ireland’s finest cocktail export, Sean Muldoon.

In recent years Sean Muldoon and Jack McGarry have taken the New York bar scene by storm with their innovative, world-renowned bars and their love of Irish Whiskey.

The final, which took place in a secret location, was judged by Sean Muldoon, along with leading drinks industry experts including Ger Garland, Irish Whiskey Ambassador for Irish Distillers Pernod-Ricard; Jason Scott, owner of Bramble Bar in Edinburgh and Craig Harper, UK On Trade Manager for Fever-Tree.

The event kicked off with a blind taste testing of Irish Whiskeys, challenging the bartenders palate and product knowledge, before they were introduced to the Jameson Larder, which contained a huge selection of spirits, fruit, vegetables and juices for the Invention Test round.

Bartenders were allowed to choose just five ingredients to create their cocktail invention and only five minutes to serve it, with Nicole’s ‘Sine Metu’ being a firm favourite with the judges.

The final round was the Speed Round, which tested the competitors’ ability to pour 10 Jameson, Ginger & Lime at speed and under pressure.

The competition was created by local drinks company Dillon Bass, and the winner, Nicole Kane from Muriel’s Café Barimpressed judges with her personality and all-round bartending talent, demonstrated expertly in each of the rounds.

Nicole said of winning: “You have no idea what it means to me. The Dead Rabbit in New York is every bartender’s dream, especially as Sean and Jack come from Belfast.

“I’ve been bartending for 10 years; and I have always enjoyed Jameson products.  Sean is such an inspiration for the industry too, we all look up to him for what he has achieved.

“I’m hugely thankful to Jameson NI for giving local bartenders the chance to win this incredible prize and for all their support for my profession.”

“There was an extremely high standard of bartending capabilities shown tonight. Some excelled in particular rounds, but Nicole was fantastic throughout the competition and impressed in every round. Congratulations again!”

“We are delighted to witness such passion, skill and enthusiasm from the finalists.

“All eight finalists deserve a massive congratulations as they each showed such creativity, attention to detail and certainly made things very difficult for our judges.”