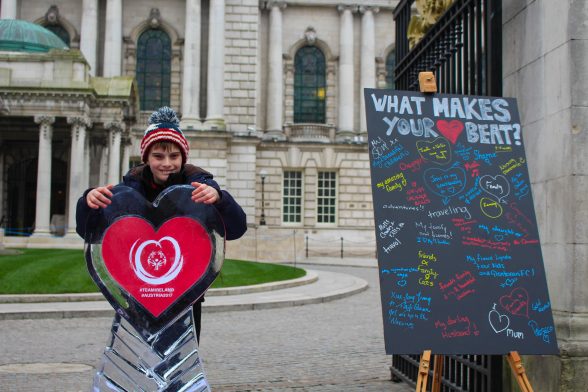 With less than a month until Team Ireland head off to compete at the Special Olympics World Winter Games in Austria, one young member of the squad helped Special Olympics to share the love in Belfast city centre this Valentine’s Day. The Games, which feature the strapline ‘Heartbeat for the World’, will attract over 3,000 athletes from over 107 Countries between 14 – 25 March 2017.

WITH less than a month until Team Ireland head off to compete at the Special Olympics World Winter Games in Austria, one young member of the squad has been helping Special Olympics to share the love in Belfast city centre this Valentine’s Day.

Co. Antrim Skier, Caolan McConville, aged 13 is one of three local Ulster skiers that’s getting set to head to Austria next month as part of a 26-strong Team Ireland squad.

On Valentine’s Day, Caolan joined Special Olympics as the charity invited the public to answer the question ‘what makes your heart beat?’

Writing on a large blackboard outside City Hall people pledged their love for everything from their pets, children, wives and girlfriends to their husbands, children, grandchildren, Glentoran FC, travelling, Greggs sausage rolls, bees and everything in between!

A large heart-shaped ice sculpture inset with the World Games logo was also installed outside City hall; as it melted providing a poignant reminder that time is running out to support local Special Olympics athletes. And at lunchtime, a duo of buskers serenaded passers-by with free renditions of classic love songs.

Answering the question ‘What makes your heart beat?’ Team Ireland skier, Caolan McConville said: “Skiing makes my heart beat and so does Special Olympics. But what would really make my heart beat would be a gold medal! I’m so excited to be going to Austria as part of Team Ireland next month – it’s going to be an amazing experience.”

The activity was designed to raise awareness of Special Olympics ‘Support an Athlete’ campaign, which aims to raise funds for athletes travelling to compete in the Special Olympics World Winter Games in March.

As the countdown to the Games enters its final month, Special Olympics Ulster is calling on local businesses to get behind Team Ireland by pledging their financial assistance to the Support an Athlete programme.

To cover the cost of sending Team Ireland to the World Winter Games 2017, Special Olympics Ireland needs to raise £2,675 perathlete. A company can choose to support one athlete, many athletes or make a donation of their choice.

Through this campaign,athletes will realise their dreams of representing Ireland on the world sports stage.

Commenting after the event, Shaun Cassidy, regional director, Special Olympics Ulster said; “Our local Ulster athletes are incredibly excited to have the opportunity to compete on the world stage at the Special Olympics World Winter Games 2017 and are enjoying the build-up now the countdown is well under way.

“We are working hard to generate the funds to make this experience everything it should be for our athletes. Having the support of local businesses and corporate donors will make a huge difference to our athletes on this exciting journey.”

Businesses in Northern Ireland that would like further information on how to support Team Ireland, should visit www.specialolympics.ie or call the Special Olympics Ulster office on 028 9089 2996.

Special Olympics Ulster is a year-round sports training organisation and is supported by Sport Northern Ireland.