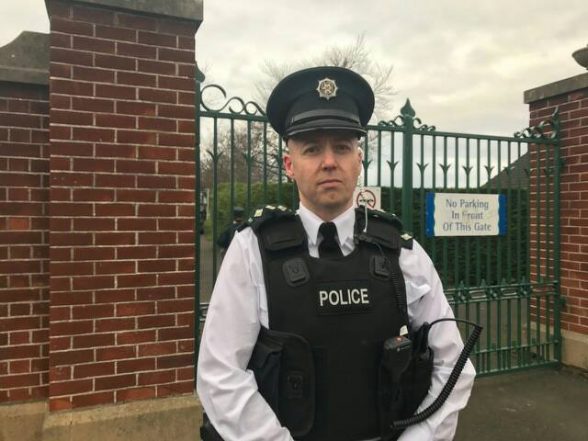 POLICE are appealing for information following the attempted murder of a

A 31-year-old man at home at the time when a gunman sprayed the downstairs room of the house at Carrigart Crescent, Craigavon, with automatic gunfire.

Up to 20 rounds were fired into the room, with one hitting the man in the head.

Neighbours rushed to his aid before raising the alarm.

The getaway car used in the attack was stolen in Dublin in December and fitted with false plates.

It was later found burned out in Lurgan.

Chief Inspector Jon Burrows said: “At approximately 1:45am, at least 20 shots were fired, possibly from an automatic weapon, into the front living room window of the house.

“The man, who was in the house alone at the time, was taken to hospital for treatment for injuries which are described as life threatening at this stage.

“At this stage we believe that those responsible had carefully planned this attack.

A silver Skoda Octavia, which had been stolen in Dublin in December 2016, and which was bearing false registration plates, was found burnt out shortly after the attack just over a mile away in the New Line area of Lurgan.

“We believe that this vehicle may have been involved in this incident and are keen to trace it’s movements in the time leading up to the shooting.

“We are working to establish a motive for the attack and I would ask anyone with any information about the incident itself or any ongoing issues in the area to contact detectives in Lurgan on 101 quoting reference number 64 13/02/17.

Information can also be given anonymously through the independent charity Crimestoppers on 0800 555 111.”