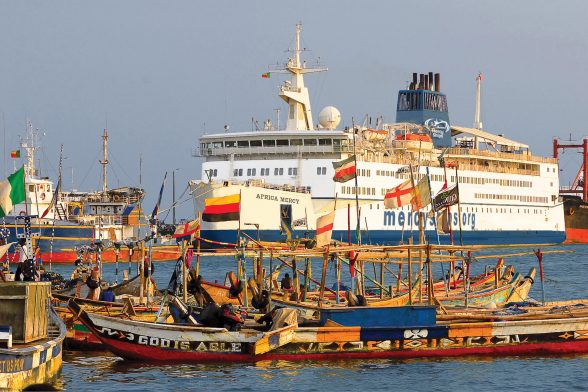 The M/V Africa Mercy in port in Cotonou, Benin with fishing canoes in the foreground

The goal is to raise general awareness about the charity, promote volunteering and charitable giving both within Stena Line itself as well as amongst its passengers and partners.

Mercy Ships owns and operates the largest civilian hospital-ship in the world to deliver free, world-class health care services to the poorest of the poor together with capacity building and sustainable development to nations in the developing world.

Since 1978 Mercy Ships has helped more than 2.5 million people.

The ship’s crew is made up of more than 400 volunteers from up to 40 nations. Surgeons, nurses, technical, marine and many other professionals, an average of a 1 000 volunteers yearly, pay their own expenses to aid those in need of safe surgical expertise and healthcare.

“We have found a partner with the right qualifications and commitment who, like us, sees the advantages and flexibility in having the sea and ships as workplace.

“Care is part of our soul which means that our sustainability work includes more than just environmental initiatives. Our partnership with Mercy Ships now becomes an important part of that work and it gives us an exciting opportunity to involve our staff, customers and partners in making a difference.” says Niclas Mårtensson, CEO at Stena Line.

“Mercy Ships is a unique organisation and we very pleased to see the great support from Stena Line.

“They have taken our mission to their heart and it is great to see their willingness to partner with us to support the work we do,” stated Pascal Andréasson, Head of Marketing for Mercy Ships Sweden.

At the end of January, Stena Line’s CEO Niclas Mårtensson visited the Africa Mercy, currently docked in Cotonou Benin, to see for himself the work done on-board.

The Mercy Ship is a former Scandinavian rail ferry which was converted to a hospital ship with five operating theatres and spends ten months at a time in African port cities.

The impressions at the visit were many as Niclas Mårtensson says:

“I see the great need to support Africa, where Mercy Ships with their volunteers, their commitment and knowledge, make an enormous difference.

“During the stay on-board the vessel in West-Africa, where I met patients and saw the operation of the organisation, I realised that this is a life-changing contribution. To see and experience this is a very important experience for me.” 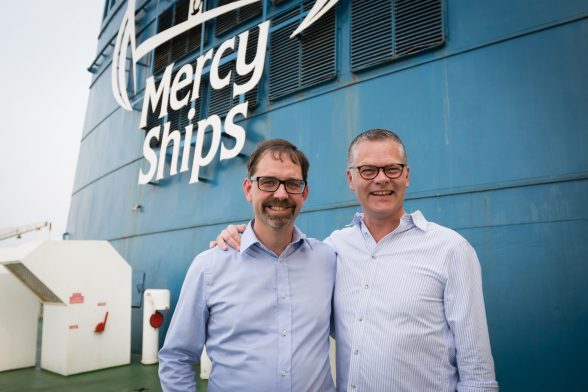 Stena Line’s vessels and social channels will be able to reach some 10 million people every year with information about Mercy Ships.

During the spring of 2017 Stena Line will cooperate with Mercy Ships Sweden to bring awareness of the charity’s commendable cause on their vessels in all of Europe.

Stena Line is also presently working to set up a programme for sponsoring staff/crew who would like to join as volunteers on Mercy Ships vessels.