CONSULTATION TO START ON £400M REGENERATION OF CENTRAL BELFAST 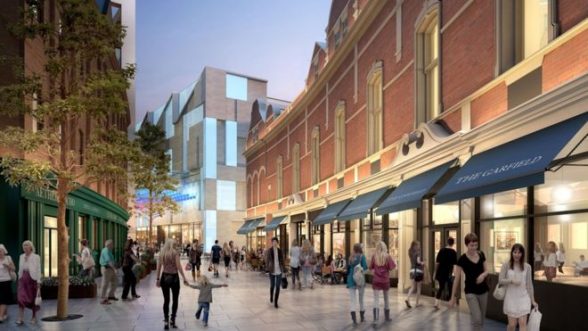 A COMPANY which owns a large part of central Belfast is to submit new plans for the £400 million regeneration of an area formerly known as Royal Exchange.

Castlebrooke Investments has properties on 12 acres between Royal Avenue and the Cathedral Quarter, a project formerly known as Royal Exchange.

The company plans to submit a refreshed planning application, including a new proposal for an office building.

It intends to begin by refurbishing Garfield Street and the Northern Bank building on Waring Street.

The Royal Exchange scheme was first proposed in 2006 and granted planning permission, but it stalled because of the property crash.

Last year, it was sold by the Cerberus investment fund which had control of the loans underlying the properties.

Castlebrook said the project will represent an overall investment of approximately £400m when fully developed, with the construction alone set to cost in excess of £250m.

A spokesman said: “This is the start of a process to revitalise a site which has been badly in need of regeneration for some time.

“We intend to implement the scheme in a way that protects the important heritage of the area by starting with the refurbishment of Garfield Street and the Northern Bank on Waring Street.”

The design team for the scheme include Chapman Taylor, the architects whose schemes include MediaCity in Salford.

Royal Exchange has previously been proposed as a possible site for a John Lewis department store.

However, the retailer has only ever expressed an interest in opening a store at the Sprucefield retail park near Lisburn.

Castlebrooke will hold public consultation events at The Mac Belfast on 14, 27 and 28 February.