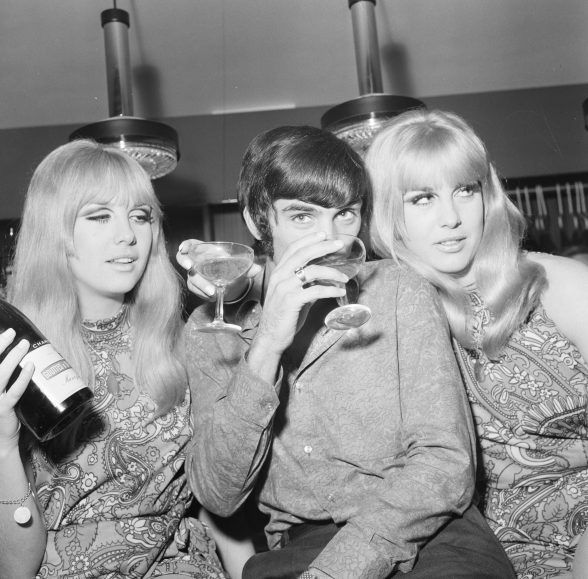 Manchester United footballer George Best celebrates the opening of his fashion boutique with a few glasses of champagne.
14th September 1967.

GEORGE Best remains one of the most naturally gifted footballers there has ever been. Famously called the ‘best player in the world’ by Pelé, Best galvanised Manchester United’s five-year recovery from the tragedy of the Munich air crash in 1958.

His skill and exuberance inspired them to win league titles and the European Cup, even though he was little more than a teenager.

Tragically, his career in the upper echelons of sport was over before he turned 29, the result of his bruising battle with alcoholism and the crushing pressure of modern fame.

The George Best biopic Best (George Best: All By Himself) was commissioned by the BBC and made by Fine Point Films, the acclaimed team behind Bobby Sands: 66 Days.

For Best (George Best: All By Himself), producer John Battsek (2016’s Oscar-nominated Winter on Fire: Ukraine’s Fight for Freedom, The Imposter, Project Nim) and director Daniel Gordon re-team after their acclaimed, Emmy-nominated ESPN Films’ documentary Hillsborough to deliver a heart-breaking portrait of one of the world’s truly great sporting talents.

The film will have its Irish premiere in conjunction with the Belfast Film Festival on Thursday 16th February in Movie House Dublin Road.

This will be followed by a screening at the Audi Dublin International Film Festival on Saturday 18th February in Cineworld Dublin.

Director Dan Gordon and producer Trevor Birney will attend both screenings and will take part in post-screening Q&A’s.  The film will then go on general release in Ireland and the UK on Friday 24thFebruary.

The documentary which had its world premiere at the BFI London International Film Festival in October, was produced by Trevor Birney, John Battsek and Brendan J. Byrne for Fine Point Films, Passion Pictures, VeryMuchSo Productions and ESPN Films, with support from Northern Ireland Screen and BBC Television.

Tickets for the screening in Belfast on Thursday 16th February, Movie House Dublin Road, 6.30pm are on sale now: http://tinyurl.com/jj8lp5m

Tickets for the Audi Dublin International Film Festival screening on Saturday 18th February, Cineworld Dublin, 8.45pm are on sale now at http://www.diff.ie/festival/film/best or by calling +353 1 687 7974