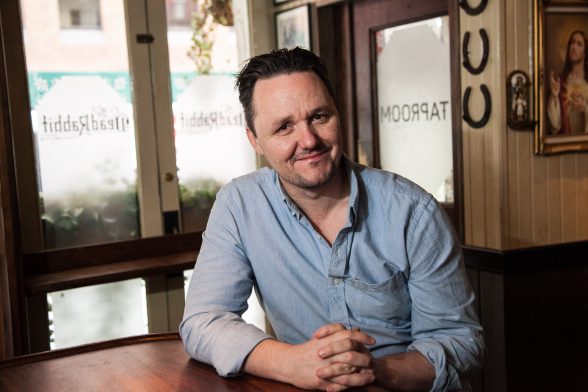 ‘YOU’RE good, but are you NYC good?’ That’s the question that Jameson Irish Whiskey is asking local bartenders across Northern Ireland.

The world’s number one Irish whiskey has joined forces with homegrown cocktail connoisseur, Sean Muldoon, founder of the world’s best bar, The Dead Rabbit to give NI bartenders the opportunity to win a chance in a lifetime trip to New York.

Muldoon, along with co-founder, Jack McGarry is the driving force behind legendary New York bars, The Dead Rabbit and BlackTail at Pier A.

Having cut their teeth at Belfast’s 5-star Merchant Hotel, the pair have remained passionate advocates of Belfast and its burgeoning bartending scene.

The successful winner will gain behind the scenes access to the world’s best bar, the Dead Rabbit and BlackTail at Pier A, as well as flights from Dublin to New York for two adults, three nights’ accommodation in a 4* hotel and $1000 spending money.

The prestigious Jameson NYC Experience challenge, which has been designed by local drinks company Dillon Bass in partnership with Drinksology, aims to uncover the greatest movers and shakers in bartending from across Northern Ireland.

The competition, which will be judged by Sean and a panel of industry legends will see 10 finalists battle it out at a live final in Belfast on 20th February, demonstrating their skills in three key areas: knowledge, innovation and speed.

The competition will begin with a blind taste test to assess the contestants’ palate and product knowledge, followed by the creation of an innovative cocktail using products from the “Jameson larder”. Finally, contenders will be asked to conduct a speed round, where they will need to ensure to maintain the perfect serve under pressure.

Commenting on the competition, Sean Muldoon, co-founder of the Dead Rabbit and BlackTail at Pier A, stated:

“Over the years, Jack and I have managed to win a lot of awards – from the Merchant in Belfast to the Dead Rabbit and now BlackTail in New York.

“We know what it takes: the dedication, the obsessive attention to detail, the care and the craft. I’d love to see those qualities reflected by the next generation of bartenders back home.

“I’m looking forward to the competition – and discovering someone who’s going to amaze us all.

“We are proud to partner with Sean Muldoon and the teams at The Dead Rabbit and BlackTail at Pier A to provide this once in a lifetime opportunity to Northern Ireland’s bartenders.”

Entries for the Jameson NYC experience are now open, and can be submitted via www.JamesonNYCexperience.com.

The closing date for online entries is Wednesday 8th February 2017. Full T&Cs can be found on