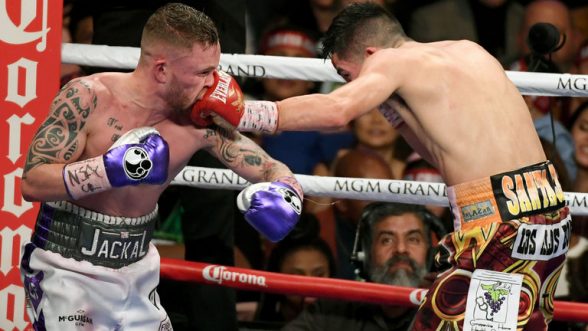 CARL Frampton lost his WBA ‘super’ featherweight title and his unbeaten record after suffering a points defeat to Leo Santa Cruz in their Las Vegas rematch.

The north Belfast fight could not repeat his points victory in the first fight as Santa Cruz claimed a narrow win on the judges’ cards with two scores of 115-113, while the third scored it a 114-114 draw at the MGM Grand.

Frampton and Santa Cruz displayed a little more discipline in the second fight following their wild shootout in the first, but would share another exciting battle as the Mexican gained revenge.

In a boisterous atmosphere, both fighters resumed their rivalry in the opening round, and Santa Cruz landed a straight right hand to signal the start of more enthralling action.

Frampton attempted to slow the pace with more measured work in the second and pushed out probing jabs and range-finding right hands.

Into the third, Frampton spent much of the round on the back foot, but forced Santa Cruz to the ropes with a flurry of punches in the last 30 seconds.

That brief exchange was a hint of what was to come in the fourth, with the duo electing to stand and trade, and referee Kenny Bayless ruled that Frampton was floored by a push when he fell to the canvas.

Santa Cruz seemed to be having the final word in a number of the early skirmishes and ended the fifth on the attack to draw roars from his home support.

But Frampton enjoyed success in the sixth, lashing in hooks at close quarters, and seemed to dictate the seventh on the front foot as Santa Cruz gulped for air.

This sustained assault was smothering Santa Cruz, who was bullied to the ropes in the eighth round, although the three-weight world champion showed his class in the ninth as he landed a big right hand.

In the closing rounds, Frampton forced himself forward in a brave bid to close the deficit on the cards, and could only walk onto a string of spiteful shots from Santa Cruz.

With just three minutes remaining, the fired-up Frampton desperately tried to preserve his perfect record with a knockout punch, but Santa Cruz celebrated at the final bell and could have set up a third fight.

In their post-match interviews, both fighters stressed their willingness to meet again, and Frampton admitted the final verdict was fair.

“It was a very tough fight,” said Frampton. “Some of the rounds were close. I feel that Leo probably deserved it.

“Can I just say one thing, I want to apologise to the travelling support. The best man won tonight, but I’m deeply sorry.

Asked about a rematch, Santa Cruz said: “Of course, I’m a man of my word. I would be happy to give him the third fight.

“Me and him, we are great fighters, we deserve it, and we can do it again.”