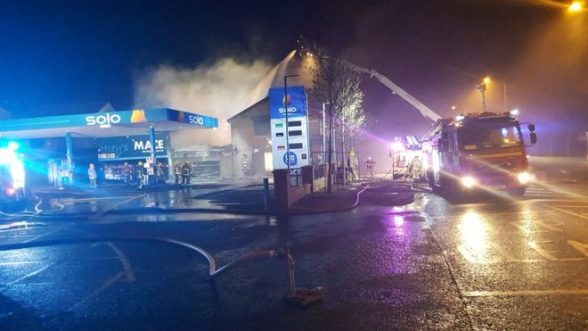 A number of homes were evacuated after a fire at a petrol station complex in west Belfast.

The fire happened at a garage on the Stewartstown Road in the early hours of this morning, Wednesday, January 11.

The fire service said the blaze was contained to single building and did not spread to the petrol pumps.

The cause of the fire is not yet known.

It is understood residents returned to their homes at about 6 am.

Local Sinn Féin councillor Stephen Magennis said he understood that no one was hurt in the blaze and that six or seven houses were evacuated as part of the operation.

Mr Magennis said that after being told about the fire shortly after 02:00 he looked out his bedroom window and “could see the flames over the top of the houses”.

“When I made my way round, the police and fire brigade were evacuating houses that were backing on to the garage, and they informed me the actual garage building was engulfed.

“Obviously with the garage and the fuel and everything else, it became a big worry.

“The police sealed off the Stewartstown Road, part of Foxes Glen and Twinbrook as well.

“I have to say the police and the fire brigade put on a fairly professional operation, getting people out safe, getting them into places and also securing the area.”

He added: “I would say residents were probably in shock because of what had happened, especially the intensity of the fire at the back of their homes.

“One resident told me that she went down to get a glass of water, saw the whole garage building on fire and then alerted the fire brigade. She was saying, if she hadn’t come down would anybody have seen it?

“So people were fairly in shock, very worried and fearful.”

A Northern Ireland Fire & Rescue Service spokesperson said: “NIFRS are dealing with a fire at a commercial Service Station on the Stewartstown Road, Belfast.

“Seven fire appliances, an aerial appliance and a command vehicle are currently at the scene dealing with the incident.

“The cause of the fire is unknown at this time.

“Fire Investigation officers will attend the scene following conclusion of the incident.”