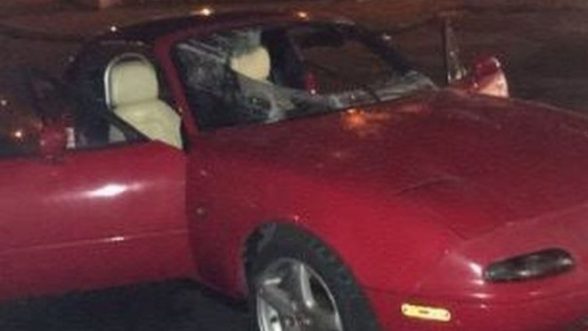 A SENIOR police officer has said car criminals involved in “death-driving” are putting lives at risk.

Chief Inspector Norman Haslett was speaking after police dealt with a stolen car that was driven at high speed through west Belfast on Saturday evening.

Officers came under attack from bottles and bricks as they tried to recover the car which was stolen from Galway Street at 7.15 pm.

It was driven into the Divis area where a crowd had gathered.

The senior PSNI officer said the car was being driven “recklessly” and “extremely dangerously”.

“Thankfully some concerned members of the public called police and we were able to respond because of that really, really quickly,” he said.

“My understanding is that the vehicle was about to be burnt by the people who had stolen it but the quick response by police prevented this.

“Whenever my officers arrived at the scene they were attacked by a crowd of up to 20 people who were throwing bricks and bottles. Thankfully no-one was hurt. The crowd was very quickly dispersed and the vehicle was recovered.”

The officer said those who engaged in so-called joy-riding or what police now refer to as death-driving, were criminals.

“It’s madness to be driving a vehicle like this at high speeds in a densely populated built-up urban area like this where families are living and going about their daily business,” he said.

“These people basically need to wise up and think about these consequences before they undertake this type of behaviour.

The senior officer said there had been a reduction in such types of incidents.

“Historically this behaviour has been going on for a number of years,” he added.

“This type of incident is not as frequent as it used to be. Vehicle crime across Belfast, even from last year, is down 25% and in west Belfast it’s down by almost 50%.”

Michael Donnelly, a community worker in west Belfast, said the local community condemned such incidents and said there had been an increase in the Divis area.

He said tackling the issue was more than just a “policing matter”.