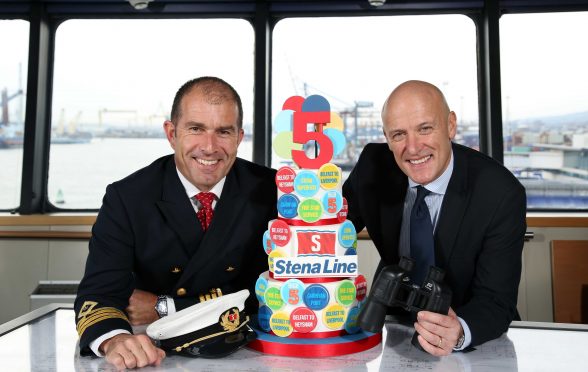 The new service opened in 2011 and was part of an £80m investment by Stena Line which saw a new 27-acre state-of -the -art Loch Ryan Port being built at Cairnryan in Scotland and the introduction of two Superfast ships, the largest ferries ever to sail between Northern Ireland and Scotland.

Since the opening crossing at 07.30 hrs on the 21st November 2011, Stena Line has delivered some impressive performance figures including total carryings to date of 5m passengers, 1.3m cars and coaches and almost 900 000 freight units.  A total of 20 450 trips have been made over the last five years during which time Stena Line has delivered an impressive sailing reliability statistic of 99% of crossings leaving on or ahead of schedule.

“Five years ago, we committed a significant investment to enhance ferry services between Northern Ireland and Scotland and I’m delighted to say that our support and vision for this route have been rewarded by year on year increases in our passenger, car and freight volumes.

“Since 2011 we have effectively doubled our freight volumes on the service and that coupled with a 19% increase in car traffic and 18% increase in passenger volumes make for a very successful first five years of service.“

Paul Grant concluded: “With innovations such as Stena Plus and Pure Nordic Spa providing the only onboard sauna, Jacuzzi and beauty treatment combination on the Irish Sea, we have taken service levels to a new high on the Irish Sea over the last five years and we will continue to enhance our customer experience in 2017 with our forthcoming comprehensive fleet refit programme.”

Stena Line is the market-leading ferry operator on the Irish Sea, offering the largest fleet and the widest choice of routes from Ireland to Britain.

Together with the company’s Dublin to Holyhead and Rosslare to Fishguard routes, Stena Line now offers customers a total of 222 weekly sailings across its Irish Sea network.

Last year, the company carried more than 2.5 million passengers on its Irish Sea routes between Ireland and Britain, more than its rival ferry operators combined.