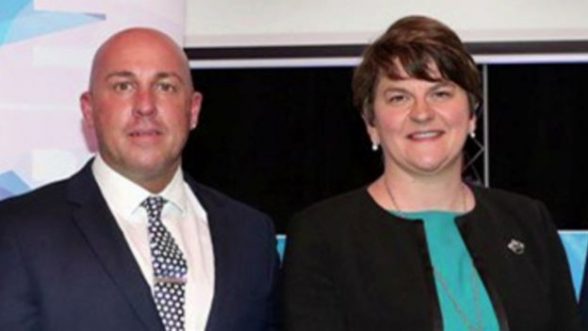 SDLP Nicola Mallon has said Charter NI’s work has been tarred by its association with UDA North Down thug Dee Stitt.

Stitt is the chief executive of Charter NI which received £1.7 million from the Executive Office of First Minister Arlene Foster and deputy first minister Martin McGuinness.

And Stitt is also the UDA’s north Down commander.

There have been calls for Stitt to stand down began after he claimed the government does not care about Northern Ireland in a foul-mouthed rant to The Guardian newspaper.

He later apologised and was expected to stand down from his post later refused.

Charter NI have since dealt with him internally and given him a final written warning over his conduct.

Stitt reports to UDA east Belfast brigadier Jimmy Birch – who sits on the board of Charter NI.

“Charter NI has unfortunately come to symbolise the secrecy and the arrogance of the SF/DUP Government.

“£1.7m of public money was given to Charter NI by the First and deputy First Ministers without transparency and behind closed doors.

“The review by the board of Charter NI into the conduct of its own CEO Dee Stitt was conducted without transparency and behind closed doors.

“When elected representatives try to ask legitimate questions, the door is slammed in our face.

“This is a shameless exercise in back covering.

“The board of Charter NI is covering the back of its CEO Dee Stitt.

“There are good people in Charter NI who are doing good work on the ground but until an independent review is carried out, all of that is overshadowed by the cloak of secrecy which undermines Charter NI and benefits nobody.”

First Minister Arlene Foster has refused to back calls from her deputy Martin McGuinness for Stitt to stand down.

However, Mrs Foster said she could not tell the organisation what to do over employability issues.

She said she regretted the fact that Mr Stitt had now become “a distraction”.

“My view is he has become a distraction to the work that’s ongoing in east Belfast and I regret that,” Mrs Foster said.

“This man is an employee of Charter NI and they have to deal with him as they see fit, it would be wrong for me to intervene in all of the different organisations that exist across Northern Ireland.”