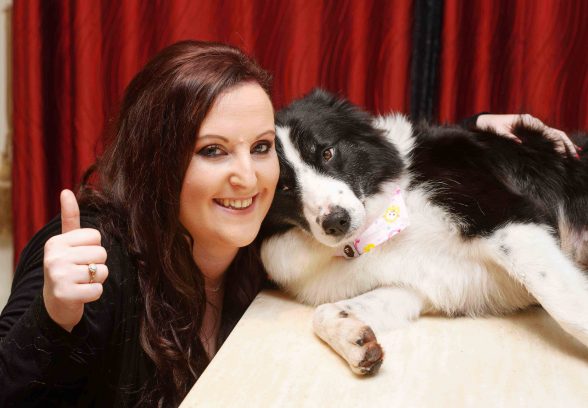 MAKE MINE A BRANDY…..Daisy, the six year old Border Collie, winner of Face of Brandy 2016 pictured with her owner Sarah Adams at home in Gort, Co. Galway.

THEY say that every dog has its day and that is certainly true for a border collie from Connacht after beating off competition from all corners of Ireland to be crowned the Face of Brandy 2016.

Daisy, from the town of Gort in the south of County Galway, was chosen from hundreds of entries to have her portrait on thousands of dog food packs across Ireland as part of an all-Ireland competition run by Brandy, the country’s biggest home grown dog food brand.

Having been revealed as the regional winner for Connacht at the start of October, Daisy was selected ahead of three other provincial winners to appear on selected packs of Brandy Dog Food for three months with all four finalists winning a dedicated photoshoot with their prize pet, a printed photo in presentation box and, of course, a supply of Brandy Dog Food.

Now she’s all set to be hound-ed by pup-arazzi as a result of her new-found fame, according to owner Sarah Adams.

“We’re so thrilled and proud that Daisy has been named the Face of Brandy 2016,” said Sarah, “and I’m sure that she’ll cope very well with being famous!  She loves all the attention and everyone coming over to congratulate her so I think she’ll really lap it up.

“Once we heard the news that Daisy had won, I got straight on to my groomer Christina, who is brilliant, and booked her in to get groomed and bought her a new little neck scarf.  She really enjoyed it and now she’s all lovely and fluffy.”

Daisy is six years old and lives with Sarah and her partner Christopher, along with the couple’s other dogs – two staffordshire bull terriers called Honey and Trigger.

“She was the last of a litter belonging to my mummy’s neighbour and when I first saw her, I just had to take her home.  She was so cute,” continued Sarah, “and since then she has been such an important member of our family.

“What I love most about Daisy is that she’s a super happy dog and loves to play.  She loves music has so much energy and loves going in the car or for long walks in the park.  She’s a delightful dog, super smart and really cuddly – and she loves people, especially children.

“Of course, she also loves all flavours of Brandy Dog Food but her favourite has to be chicken,” concluded Sarah.

“We would like to congratulate Daisy on becoming our very first Face of Brandy,” said Gwen.  “It was such a difficult decision for our judging panel to pick a winner but we feel we’ve made the right choice and now we look forward to seeing Daisy on our packs over the coming months.

“We’d like to say a huge thank you to all the dog owners who took time to send us photos of their prize pets.  Now more than ever, owners view their dogs as key members of the family and this really came across in our competition entries.  With this in mind, they obviously want to feed their dogs the best food that they can which is where Brandy comes in, offering high quality, 100 per cent Irish meat at a great value price,” she added.

Aside from Daisy, the other regional finalists in the Face of Brandy 2016 competition were Munster winner Buddy, a Jack Russell cross breed from Killarney, Leinster winner Nutmeg, a lurcher greyhound cross from Dublin, and Ulster winner Jess, a cockapoo from Belfast.

Brandy is uniquely made by Mackle Petfoods using only 100 per cent Irish meat sourced from across the Island of Ireland, all traceable from farm to bowl.

Mackle Petfoods, an independent family-owned and managed business in County Armagh, was formed in 1971 and now has 45 years’ experience working within the pet food industry.  Brandy has grown from strength to strength during this time and remains the number one Irish-made dog food brand on the island of Ireland.

Brandy is available in a range of pack sizes and varieties as well as in a dry dog food option.