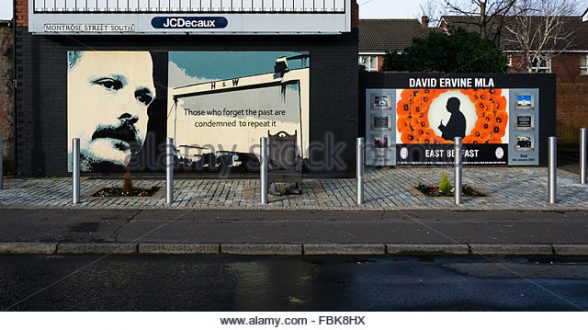 THERE has been condemnation after a councillor was was attacked when he tried to stop youths defecating on a memorial to the late PUP leader David Ervine.

He said one was defecating while the others filmed it on mobile phones.

Mr Kyle said when he shouted at them, one of them kicked him off his bike and fled towards the Short Strand.

A PUP statement said their councillor followed the youths into the Short Strand and then reported the incident to police as a “sectarian hate crime”.

A police spokeswoman said officers were investigating an assault on a man in the Albertbridge Road on Sunday morning and a report of “attempted criminal damage to a memorial”.

Former Sinn Fein Belfast Lord Mayor Niall Ó Donnghaile and East Belfast Councillor Mairéad O’Donnell have condemned the assault on Cllr Kyle of the PUP and the disgraceful attempt to deface a memorial to the late David Ervine.

“I have spoken with Dr Kyle on a number of occasions to express our solidarity with him.

“This was a disgraceful attack on a memorial and Councillor Kyle should never have been subjected to what took place this morning.”

“Memorials, from whatever background or tradition, should be respected and should not be targeted by anyone.

“Sinn Féin in East Belfast has consistently faced down anyone who would attack such memorials.

“There can be no tolerance for this type of vandalism and the PSNI must fully investigate what took place and apprehend those responsible.”