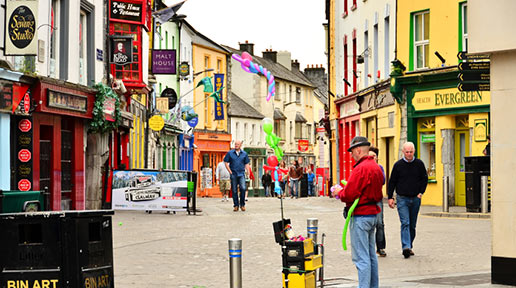 GALWAY City is a thriving, bohemian, cultural city on the western coast of Ireland.

Along with being a popular seaside destination with beautiful beaches and long winding promenade, it also has a buzzing cosmopolitan city centre.

The city is a joy to explore with its labyrinthine cobbled streets, colourful shop facades and busy café/ bar culture.

The city is also well known for its many festivals throughout the year with huge crowds gathering for the annual Galway Arts Festival, Races and numerous other events.

You Have to walk!

For me there is only one way to walk in Galway and that is with probably one of the best tour guides I have ever been with, Brian Nolan from www.Galwaywalks.com.
Brian is a mind of information, his head is jam packed with knowledge and a master of knowledge.

He knows everyone and everyone one who is anybody in Galway knows him. He can open doors you never though could be opened and on top of that he is a brilliant guide too.

My tour took me to the Spanish Arch called ‘The Claddagh’ where the River Corrib meets Galway Bay.

Galway later became a walled town in the year 1232 after the territory was captured by the Anglo Normans lead by Richard De Burgo.

We walked along by the town walls, some sections of which can be seen today near the Spanish Arch.

Brian explained to us Galway’s strategic coastal location as a natural harbour and how successful the people were who traded with both Portugal and Spain.

A trip to the Claddagh cottage really sets the scene for Galway, a small peat fire and that beautiful smell that hugs Galway like a blanket, oh if only they could bottle it. After the

Claddagh cottage we were off  to salthill where we watched the brave people who were swimming every day in the sea down at the famous diving boards and the kick wall.

Take the Promenade and Kick the Wall

The Kick Wall is a tradition where you kick the wall on completing Ireland’s longest promenade.
Across the road from the Kick wall plate is a tranquil and serene garden called the circle of life.
The Circle of Life national organ donor commemorative garden is located in the beautifully sited seafront Quincentennial Park in Salthill overlooking Galway Bay.

the garden reflects the spirit of giving, the enduring legacy which defines the lives of organ donors.

It is a special place of thanksgiving and commemoration, and through its mix of imagery, symbolism and sentiment, engenders feelings of positive transformation, healing and hope.

The garden was developed by Strange Boat Donor Foundation in partnership with Galway City Council and was formally opened on May 6th, 2014.

Please take the time to

After my walk through theCircle of Life Garden I was off to the infamous O’Connors Bar in Salthill. With over £1,000,000 worth or antiques this amazing place is worth a visit. Check out ww.oconnorsbar.com. Note it only open in the evening.

If the over 150 pubs in Galway can’t satisfy you, you can call into the Galway City Museum or the National Aquarium which will fill a wet afternoon.

On any day the Glaway buskers will be out in force and they will serenade you as you tread the cobbled streets hopefully of to McDonaghs fish and chip shop http://www.mcdonaghs.net/

McDonaghs have been feeding Galway for years and as they own a fish shop it seemed insane not to open a fish and chip shop in the town too. They have and its amazing.

Eating in Galway is a delight.

Galway is blessed with some of the beast eating-houses in Ireland. Everywhere I ate was great. Blakes Bar is definitely worth a visit. The décor is beautiful and service is great and so is the food. It is however a little overpriced.

But for me and they win my “do not miss” award is the newly opened PAPA RICH street food Bar located in Daly’s Place.

You must not miss this food it is simply amazing. Malaysian street food, wonderful tastes of the orient served quickly beautifully and delicious. If you do nothing at all in Galway you must visit here.

Asian food at its best.

After this fine eating you will need somewhere to walk so you can head off to the beautiful Kylemore Abbey or Ashford Castle.

And it was indeed Ashford Castle that I called into for a spot of lunch. The magnificent five star Ashford Castle is set in 350 acres, on the picturesque shores of Lough Corrib.
Dating back to 1228, the castle now enters a new chapter in its history, as part of The Red

Carnation Hotel Collection. With 82 spectacular rooms, suites and the Hideaway Cottage, a wealth of activities and plenty of thoughtful touches, guests will enjoy acclaimed Irish hospitality on a grand scale. The castle has recently had a multi million pound facelift and when you spend any amount of time here its not hard to understand why it has some of the accolades listed below:

Galway is traditional music, its everywhere and there is so much to choose from. There are also late clubs for the younger ones or simply soaking up the craic in the city streets. The Latin Quarter is the place to be at night and just walk down the street to hear which pubs have music. Most will have something going on.

Galway is an amazing city and one to which I shall return.