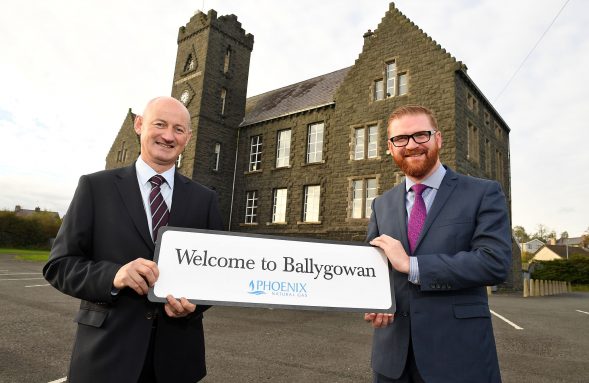 BALLYGOWAN is the first of 13 new towns to be connected to the Phoenix Natural Gas network as part of a £60 million expansion project.

The expansion project, which was granted permission by the Utility Regulator in December 2015, will involve the gas company bringing the benefits of natural gas to an additional 13 towns, throughout County Down, for the first time over the next three years.

Construction of the pipeline began in April starting in Ballygowan, which now has gas available with the first customers expected to be connected to the network in the next few weeks.

Director of Operations from Phoenix Natural Gas, Ivan Bell, commented; “Phoenix has an international reputation in developing natural gas networks and has already constructed 3,500 kilometres of natural gas pipelines to bring natural gas to over 330,000 homes and businesses in Northern Ireland.”

“We are using the very latest construction techniques and equipment to bring the benefits of natural gas to a further 28,000 homes and businesses for the first time.

“Ballygowan is the first of the new towns to have fuel choice and the interest levels are already extremely positive.”

He said: “This is great news for the people of Ballygowan. Expansion of the gas network brings additional energy choice to businesses, public sector, and domestic consumers.

“My Department will continue to work with the Utility Regulator and gas industry to further expand the network across Northern Ireland.”

Further information on the Gas to East Down project can be found at www.phoenixnaturalgas.com.